Teachers recognize that they are always students.  I’ve learned so much every day from this team, not just lessons in archaeology or history, but in working with a team, supporting each other, and listening to another’s viewpoint..


We got to the site early today anxious to get back to the trenches.  None of the pits has revealed anything wonderful or mysterious, but there are finds typical of a farmhouse of this period.  Today Stuart’s pit got 2 clay pipe stems. 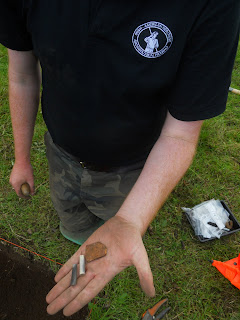 Rain- here in N. Ireland, it’s just par for the course.  Twice today we had torrents of rain for about an hour.  The pits filled in meaning they had to be emptied by hand- twice.  You can see the look of depression on Demetrios’ face and Dermot bailing water. 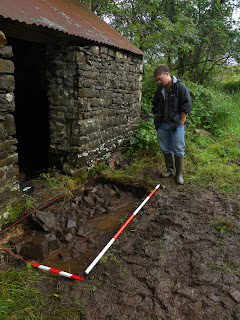 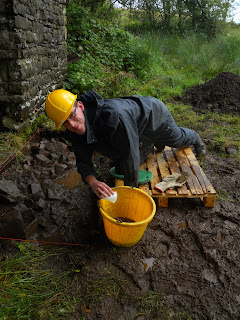 One highlight of the day was having the BBC visit us.  We had our 3 minutes of fame on the tele. 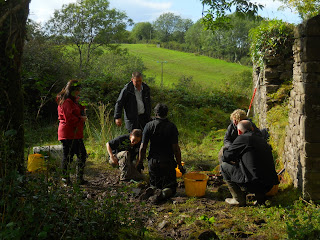 The are many elements to recording what happens here.  This is an extract from a field record as recorded by Stuart-
Summary of Trench Three Excavation
Trench Three was opened in a clearing south of the house.  This location was selected for investigation as it was though that it may have been a garden associated with the homestead.  This area is raised slightly compared to the rest of the site and the lack of rushes indicated a good degree of drainage.  Based on this evidence it was decided that this area was the most likely location of a garden that probably would have been used for growing potatoes and other vegetables.  It was hoped that excavation of this possible garden would uncover lazy beds associated with spade cultivation.  In addition it was believed that if this vicinity was used for growing vegetables a large quantity of artifacts such as clay pipe stems, pottery shards, etc would be uncovered as these types of artifacts are usually associated with middening and fertilization of a vegetable crop.
A 3 x 1 metre trench, orientated east-west was opened in the north-west quadrant of the possible garden.   Excavation began by removing the Sod Layer (Context-301), this layer included few finds, the most notable being part of a ceramic dish.  Below the Sods was a layer of mid brown cultivation soil (Context-302) with some charcoal flecks.  This soil was rich and of a good quality so probably would have been used for some sort of cultivation.  In addition this context was devoid of large stones which would suggest that they had all been removed during frequent cultivation work.  This layer like Context-301 included few artifacts, the most significant being two pieces of clay pipe, one of which had been burnt.  Removal of this context revealed the natural stony subsoil (Context-303) and unfortunately there was no evidence of lazy beds.  Nevertheless the minimal artifacts found and the lack of evidence for spade cultivation does not rule out the possibility of this area being used as a garden.
Stuart Alexander
Yesterday I posted a picture of Colm using a hammer on Stuart.  Here is today's shot.  I couldn't think of an appropriate caption.  Email me your ideas.  Just look in my profile.  I'd like to hear what you think about the picture or even your thoughts on the dig. 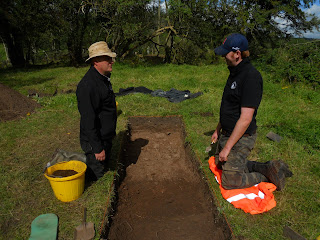 Posted by LowellIrish at Wednesday, August 24, 2011