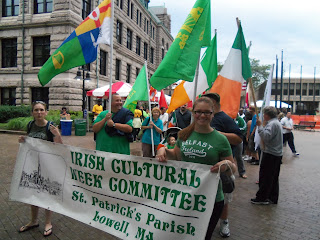 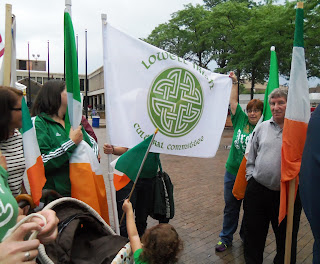 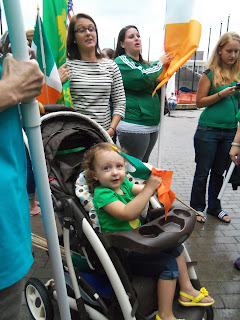 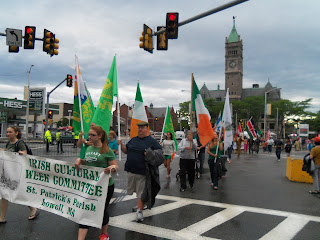 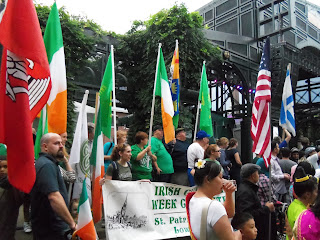 The Captain & the Irish

The story could be taken directly out of today’s headlines.  A prominent citizen using racial slurs.  Strangers in a neighborhood being eyed suspiciously.  But the events of this story happened right here in 1822.
Captain John Ford was one of the most respected citizens living in this part of East Chelmsford.  (Lowell would not be named a town until 1826.)  He was a hero of the American Revolution having led the minutemen of Chelmsford back in 1775 and being present at the Battle of Bunker Hill.  He was a tall man, wiry, and always ready to work.  Following the war he bought a parcel of land down by the Pawtucket Falls and set up a saw mill with a house nearby.  He was known on occasion to wear his old army coat with large brass buttons.  Cpt. Ford was proud of his war record and probably sat with his friends at Moses Davis’ tavern (now called the Spaulding House) to swap stories .  He often told the story that upon arrival at the mill one day he saw an Indian who proceeded to attack the Captain with a knife.  Luckily he was wearing his coat with the large buttons which deflected the blows.  The Captain took a metal bar and struck the Indian dead who fell into the sluice way of the mill and down the river.
Was the Captain merely spinning a good yarn, or was he telling of actual events?  What does the story say about the good Captain?  The next event may tell us a little more about him.
The first of the Irish laborers arrived here in April of 1822.  They probably pitched their tents and set up their camps around the area of Tilden Street.  We’re told that citizens would watch each morning as the gangs picked up their picks and poles and marched down Merrimack Street making their way to Pawtucket Falls.   What was going on in the minds of the Yankees as they saw these strangers invade their new town?  Within months the numbers of Irish had swelled to hundreds.
Things came to a head for Captain Ford in the Fall of 1822.  An early biographer wrote, “His patriotism was sadly shocked when hundreds of Irish were first brought here to dig our canals
.”  The hero of the American Revolution may have seen this as a foreign invasion.  The War against the British was still alive in the memories of much of the population.  The changes that were taking place did not fit with the Captain’s ideals of why he served.  ” On one occasion when he could not refrain from indulging in some angry, disparaging words in their hearing, they fell upon him and beat him severely and dangerously.”   According to his family the beating hastened his demise.  He lingered for two months, and he passed to his reward on November 6, 1822.  The services were widely attended with the old Chelmsford militia  accompanying him to his grave.  His remains are in the little cemetery on Mammoth Road within hearing distance of the falls where he spent much of his life.
Posted by LowellIrish at Thursday, July 18, 2013 No comments:

Email ThisBlogThis!Share to TwitterShare to FacebookShare to Pinterest
Labels: Cemetery, The 1800's, The 1800s

“Treat them with respect,” she said to me as she passed the yellowed volumes across the desk.  Sister Francis Bernadine was the archivist of the Sisters of Notre Dame de Namur in Ipswich.  What she was handing me were the original volumes of the Annals that the Sisters kept, recounting their daily lives in the convent at Notre Dame Academy in Lowell starting in 1852.  In my hands were the pages of the first years of the Lowell community written by Mother Desiree, the first Superior.  Sister’s aged hands held onto the handwritten pages; her eyes cast down on them.  Her black veil framed her face momentarily making me think I was looking upon Mother Desiree herself.  I felt that her notation about respect wasn’t just for the care of the books, but of sharing the information within them.  I hope I kept that promise.
Within those pages was one story that I could not let go of.  It is that of Henrietta, a young girl who died at the Academy.  There were only a few lines about her arrival and untimely passing, but they stayed with me.  We’re told that one day a woman named Bridget arrived at the convent door seeking placement for her young ward.  Henrietta was either 8 or 10 years old, depending on which source is quoted.  More than likely, Bridget was the girl’s Godmother and had been left with the child upon the death of her parents.  Why would Bridget do such a thing?  It was not uncommon.  The Poor Farm in Tewksbury and Saint Peter’s Orphanage were filled with such cases.  Death was not uncommon to those living in the Acre in the 19th century.   Each week the newspapers listed the number of burials.  Those in the Catholic Burying Ground often exceed the rest of the city.  Poor diet and living conditions were major factors.  Early records followed diseases such as cholera making its deadly path through neighborhoods.
We do know that Bridget told the nuns she was leaving Henrietta in their care to seek greener fields in California.  Once again, this was not an uncommon practice.  There were newspaper articles stating the fact that a number of Lowell’s Irish population was seeking opportunities out West.  Lowell was not the only city to see such an exodus.  It was repeated in other cities.  The golden fields of the West held new opportunities and new beginnings.  Was Henrietta holding Bridget back from these?
Henrietta’s life in the convent was not long, no more than a few weeks.  She may have run small errands for the Sisters or performed light duties.  The Sister’s Annals noted her sadness saying she dragged herself around the house.  Just as the new year of 1864 dawned, the nuns noted she began to languish.  They put her in the Sister’s infirmary.  After a week “she gave up her beautiful little soul saying, ‘Jesus, Mary, Joseph.’”  It was the feast of the Holy Name, January 17th.
Her passing must have moved the Sisters.  If you enter the first gate of St. Patrick Cemetery, pass the old slates and cross St. Malachy's Ave., you would come across the lots for the Sisters of Notre Dame.  Their plain, white marble markers reflect the simplicity of the Sisters’ lives.  Nestled among them is one stone that is slightly different.  The engraving says that Bridget donated the stone and that Henrietta was her “adopted daughter” 10 years old.  The epitaph is simple, “Blessed are the meek for they shall see God.”  The Sisters gave Henrietta the best honor they could, a place among them in the cemetery.  She would spend eternity surrounded by those who cared for her.
Later research revealed her full name was Henrietta Hassett, the daughter of James and Maria Hassett, both of Ireland.  She was born in Lowell in 1856, which makes her age at death to be 8.  Her Godmother recorded it as 10; an error or perhaps a rouse to make sure the Sisters would take in an older boarder.    Her death certificate reveals the cause of death as consumption, but the Sisters hint of her extreme sadness.  Could she have died of a broken heart?  Her father may have passed two years before in Lawrence, MA.  No other vital records can be found for family or extended family.  A short life, preserved only by a caring soul who recorded her name in a little volume of notes that weren’t meant to be read by anyone, except the author.

Email ThisBlogThis!Share to TwitterShare to FacebookShare to Pinterest
Labels: Cemetery, School, The 1800's, The 1800s

The road to Emmitsburg is the iconic pastoral scene.  The road begins at Gettysburg center and continues into Maryland.  The white painted fences separate the wheat fields, orchards and farmlands that make up the panorama before you.  The low hills that rise and fall paint a scene straight out of an artist’s sketchbook.  The white framed farmhouses with their bright red barns stand as reminders to the area’s agrarian past.  This is also the road where much of the fighting and dying occurred on three days of July, 1863.  It was the job of the 16th Mass Infantry to defend the Emmetsburg Road.
James and Jane Roche and their 6 children probably left Ireland about the time of the famine and found employment and housing in Lowell.  When their son, David, was old enough he got a job as an operative in the mills.  The family lived on Suffolk Street and seems probable that their life resembled that of the many thousands of other Irish living in the Acre.  When the call came up for volunteers after the Riots in Baltimore, David Roche, like many Irish, signed up, and was given the commission of Lieutenant.  Before the 16th Mass left Lowell, they attended Mass at St Patrick’s Church and marched to the trains that would carry them to war.
The 16th Mass had a full record of encounters in the early years of the war.  As 1863 dawned, now Cpt. David Roche, was given a furlough and traveled to Lowell to marry his sweetheart, Margaret Harrington, before returning to the war.  The 16th had just finished the battle at Chancellorsville when they were ordered to Gettysburg.  By day 2 of the battle it was apparent Lee was going to try to take the road.   It is said that the artillery the two forces engaged could be heard all the way to Washington.  It wouldn’t be until 8 days later that Roche’s family would be notified that their son was shot in the head during the fighting.  Cpt. Matthew Donovan, anther Lowell Irish who enlisted into the 16th, made sure that his comrade’s body was quickly buried under a tree and a marker placed for future identification.  Back in Lowell, James Roche, David’s father, hired Alonzo Quimby, a local painter, to retrieve his son’s body.  Bringing the wounded and dead back to their homes became a new business as was advertised in many newspapers.  Ads also began appearing in the Lowell Courier for women’s black woolen shawls.  The ads noted how the capes were in great demand and supplies were being replenished as quickly as possible.  The young widow may have taken advantage of the sale.
Mr. Quimby’s mission was successfully accomplished, and a full military funeral was carried out at St Patrick’s Church.  “The services were very appropriate and interesting.”  The procession was lengthy with 16 carriages and several military companies represented as well as City officials.  It would be remiss not to state that the Courier was filled with such sad stories on a daily basis recounting the deeds “of the brave soldiers who sleep their last sleep.”  Such accounts went on for the entirety of the war.
Standing by the monument, taking a photo for this entry, I noted a small grove of trees and wondered if this was where Cpt. Roche was hastily interred.  The only sound that could be heard was the wind through the tall grasses.  The tranquility of the Emmitsburg’s Road today masks the horrors of 150 years ago. (Reposted from April, 2012)
Posted by LowellIrish at Monday, July 01, 2013 3 comments: