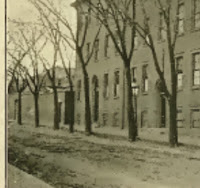 
When the old school was demolished and the new school built in 1958 most of the wall was taken down with it.  The Sisters moved to the Academy grounds at Tyngsboro and made the daily trek by car.  The wall no longer served its purpose.  A small section remained in front of the current school along with several granite capstones strewn along the fence near the housing.  By the 1980s the wall was becoming a hazard.  Bricks were falling out.  The mortar was deteriorating making the wall a potential hazard.  I was there the day they took it down, pleading that maybe a small section could be retained.  As the workmen left I stole a single brick, the only relic to tell the story.  If walls could speak……..
Posted by LowellIrish at Monday, April 27, 2015 2 comments: