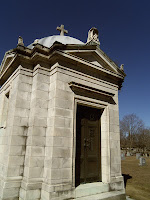 There is a sort of timeline that runs through St. Patrick Cemetery.  It begins with Yards 1 & 2 that run along Old English Cemetery.  The slate stones gradually end as more marble stones appear as one enters Yard 3.  By the end of the 1800s Yards, 4, 5, and 6 were added and the marbles turned to granite.  With the advent of technology and the rise in the economic status of the growing Irish population, the stones became more elaborate.  The simple slate stones with names and dates are often forgotten in the shadow of what is erected in the office area.  These stones too have their stories to tell.  While the slate stones are often stories of hardship and leaving home, the grander monuments tell of financial and social success.
PLEASE JOIN US ON SATURDAY, JUNE 8 AT 10 a.m. FOR A TOUR OF THE FRONT YARD OF ST. PATRICK CEMETERY.
Many folks who drive by Gorham Street cast an eye as they pass to take a look at one of the most prominent monuments in the cemetery, that of the Costello family.  The story of the monument is just as fascinating as the story of the family who built it. The following is a post written by Kim Zinino from the Lowell Historic Board and fellow gravestone enthusiast.

One of the most fascinating structures in the St. Patrick’s Cemetery is the Costello Chapel. This chapel was commissioned by prominent businessman Thomas F. Costello around 1905. With a very successful plumbing fixture business in , he had the chapel built for his son, Rev. Fr. George A. Costello, who served as the pastor of St. Bridget’s Roman Catholic Church in until his death in 1915. Thomas Costello passed away in early 1906.
Often mistaken for a mausoleum, the chapel was designed for performing Mass and the only burials are in the Costello family plot in front of the structure. Designed by the prominent Swiss-American ecclesiastical architect Franz Joseph Untersee, the classically designed chapel was built of stone from the Vermont Marble Company of Proctor, . The structure has bronze entry gates and a painted copper roof. The interior of the chapel has had some conservation issues, as the marble-covered walls have been failing and pieces have been falling onto the altar and floor of the chapel.
What makes this chapel so amazing is that it one of only a handful of Guastavino domes left in . Rafael Guastavino was a successful architect and builder in when he immigrated to in 1881 with his young son, Rafael Jr. In 1885 Guastavino Sr. patented a type of structural tiling in the called the “Tile Arch System”, in which interlocking terra cotta tiles and layers of Portland cement combined to create self-supporting arches and domes. The Guastavino Fireproof Company was founded in 1889 and was responsible for designing the tile ceilings of many historic landmarks, including the Boston Public Library, two Vanderbilt family estates, and the ceiling of the Registry Hall on . They are also responsible for designing dome at the (1896) in , which was added to the National Register of Historic Places in 2010.
Posted by LowellIrish at Friday, May 31, 2013 No comments:

Tomorrow morning my wife and I will drive into Lowell to make our annual pilgrimage to the cemetery.  Memorial Day had a different meaning when I was younger.  In the morning we would usually walk from our tenement on Broadway to Merrimack Street to watch the parade.   World War II was still fresh in many people’s minds, and veterans would stand at attention and salute as each flag passed.  Rows upon rows of soldiers marched in formation, and the vibrations from the bass drums could be felt as the bands passed by.  The afternoon would mean a drive out to the cemetery.


My father’s parents were buried in the flats section of St. Pat’s near the back gate.  Most of the year, it looks a little sad.  There is little if any landscaping and many of the stones have been overgrown with sod and grass clippings.  I always thought of this area as the workers’ section; those who spent their lives in the mills and factories and could not afford the grand marble or sculpted granite crosses.  But on this one weekend of the year, many if not most of this section would become a field of red geraniums and potted plants.  All along Gorham Street were flower stands where vendors would charge what they could to those who wished to say their dead, “We remember.”  Every now and then, a small American flag would be stuck in the ground to mark the grave of those who served their country.   My mother’s side of the family, being French, was buried at St. Joseph’s Cemetery (Cimetiere St. Joseph).  Each year we cleaned the marble marker.  I would walk around trying to translate the French inscriptions, and ask my mother what each meant.   We would light candles at home or at church to remember those who went before us; a practice my wife and I continue.
Today there are far fewer visitors on Memorial Day.  The fields of flowers that would transform the yards of stones into gardens are sparser than they used to be.  The traffic that would clog the entry ways into the cemetery don’t happen much anymore.   We’re busier today.  Our belief systems have shifted.  Traditions have been forgotten, or maybe they are just dormant for a while.
One annual visitor to St Patrick’s Cemetery was Cardinal O’Connell.  He was a regular celebrant of the annual Mass at Saint Bridget Chapel in the 1920s.  His first act would be to visit his parents’ grave near the office area where his limo would drop him off.  He’d kneel at the gravesite where he’d say a silent prayer and then proceed to the Chapel.  Some locals recalled that as soon as Mass was over he would be whisked out of town back to Boston and the “palace” he had built for himself.
Our NEW CEMETERY TOUR on JUNE 8th at 10 a.m. will tell you more about the Cardinal and the interesting story of his family’s plot.  (Why were they moved?)  The Office area has some of Lowell’s most notable politicians and businessmen of Irish decent.  Lowell’s first Irish mayor. Undertakers.  Liquor dealers.  A rubber heel maker.  And a local legend remembered for celebrating St. Patrick’s Day in an unusual way.  This new Spring tour will focus on the front Office area.  Our Fall tour will remain focused on Yard One and the Chapel area.  Let us know if you think you might attend.  Invite your friends. (See also Sept. 18, 2012 blog entry for a history of St Bridget Chapel)
Posted by LowellIrish at Friday, May 24, 2013 No comments: 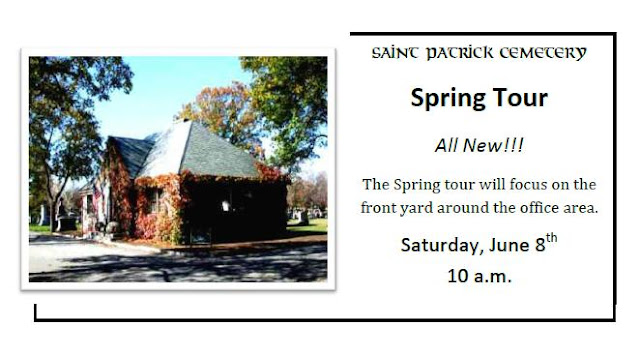 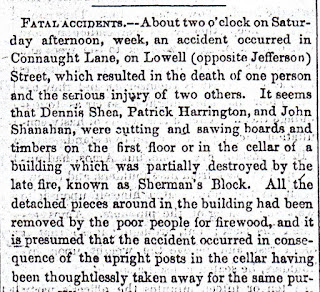 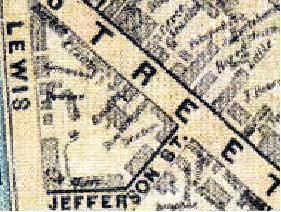 Posted by LowellIrish at Saturday, May 11, 2013 No comments:

An Acre Memory: May Devotions

There are certain memories that are embedded in your very soul when you attend a parochial school, especially in the pre-Vatican II period.  There were First Friday Masses, novenas to the Saints, Parish Missions, 40 Hours Devotions.  You could add to the list yourself.  Maybe it was the sun that drew me outside to walk the backyard.  I looked at the lilac bush and the very first buds hinting of what to come were just showing themselves.  For me lilacs have an immediate connection to May, and if you went to a parochial school that meant the May Procession.