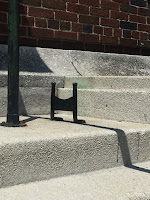 Dr. McGarry removed the bell, which called the priests to dinner, and had it installed on a small stand in the rectory hall.  (There is still a bell there today.)  The other relic he kept was a boot scraper.  He had it removed from the old rectory and installed on the steps of the present rectory.  Of course horse and carriage was the means of transport of the day and many streets were still hard-packed dirt.  Who know whose boots used this scraper?  Surely priest like Timothy, John, Michael, and William O’Brien were daily users.  Maybe the great temperance advocate, Theobold Mathew.  America’s first prelate William Cardinal O’Connell.  The Know Nothing Smelling Committee from the 1850s that investigated the goings-on in the convent.  Lowell’s first Irish mayor, John Donovan.  Eamon de Valera future president of Ireland, on his visit to Lowell.   Patrick Gilmore, composer of When Johnny Comes Marching Home, when he was married at St. Pat’s.  Or just as importantly maybe your grandfather or great grandfather or great-great.  What stories it could tell!
Posted by LowellIrish at Thursday, July 30, 2015 1 comment:


Rosemary K. Nunnally has been a guest blogger on several occasions.  Her entry tells the interesting story of Cornelius Lennon.  Great reading!

Gold was discovered in the Yukon region of Canada in 1896.  It wasn’t until the following year, 1897, that pieces of this gold made it by ship to Seattle.  Then the news spread throughout the United States and the world.  One hundred thousand people rushed toward the Klondike region between 1896 and 1899.  Out of the 100,000 people who started out, about 30,000 – 40,000 actually made it to the gold fields.  Out of this group of gold miners, only 4,000 found gold.  Cornelius Lennon, an Irish man from Lowell, was one of the lucky ones.

Cornelius arrived in the U.S. about 1879.  He was born in Ireland, possibly County Leitrim as that is where his sister Katherine died on a visit back to Ireland.  He married Mary Lynch of Tewksbury on March 4, 1889.

Cornelius caught the gold fever early. He may have seen the special pages in the Lowell Sun with the headline “Seeking Golden Treasure in Far Alaska”.  Cornelius left Lowell on August 1, 1897.  He left his job as a contractor on the construction of roads.  He also left behind his wife and three children.  They continued to live on Schaffer St. in Lowell while he was away.

Getting to the Klondike was not an easy task.  Clothing, tools, food and other supplies were needed for the journey.  Cornelius had to have had some savings to be able to undertake this trip.  He probably traveled to New York and then took a train to Seattle.  A boat would have brought him to Juneau and then the trek across Alaska to the Klondike commenced.   He may have walked with hundreds of other men and women on the Chilkoot Trail, climbing the “golden stairs”, 1500 steps cut into the snow and ice.  Cornelius had to bring food for a year, a requirement enforced by the Royal Canadian Mounted Police.

Dawson City was the center of the Klondike gold rush.  When Cornelius arrived there, he found a lively place with concert halls, dancing halls and music at every hour of the night.  He said there were many schemes to try to take your money.  He also said that it was almost impossible to obtain food.  A dinner would cost him as high as $25.00, a bag of flour $30.00.  Cornelius immediately started prospecting.  The Canadian government would allow him to stake off 500 feet along a stream.  In return, the government would take about half of the gold Cornelius discovered.

Cornelius returned home to Lowell and his family in the summer of 1899.  He came back with bags of gold.  The Lowell Sun published an interview with Mr. Lennon on July 27, 1899.  The reporter said that Cornelius was a “modest and unassuming man, reluctant to talk about his experiences”.  He did recount some of his observations. He felt that the climate was healthier than Lowell’s as he was never sick the whole time he was there.  He advised young men against going to the Klondike.  He said staying home and saving your money would be better than enduring uncertainties and privations.

Mr. Lennon showed the reporter a bag of pure gold nuggets along with another canvas bag which contained gold.  The reporter stated that “his modesty would not allow him to tell the exact amount that he had received from his venture.  Judging from the amount of gold the reporter saw, he might easily be counted among the lucky miners and surely the most successful one to return to Lowell”.

In his interview, Cornelius Lennon said he was pleased to be home with his wife and family.  He continued to live modestly on Schaffer St., working as a foreman in construction. His wife died in 1906 and his sisters-in-law, Margaret and Annie Lynch, helped him care for his children. By 1930 he was aged 77 years and living with his sister Margaret and her husband Thomas M. Donohoe.  In the Lowell Sun of December 20, 1933 it was reported that Cornelius Lennon had retired as a laborer in the street department at a yearly rate of $552.20.  It does not appear that Cornelius ever used his gold to live an extravagant life.

Cornelius Lennon died in September of 1940 at the home of his son James on Aberdeen Street in Lowell.  His funeral was at St. Michael’s Church.  Cornelius was buried in St. Patrick’s Cemetery.  The flat marker on his grave is no longer visible.
Posted by LowellIrish at Friday, July 17, 2015 No comments:

If you’ve got the history bug, you will understand the rest of this entry.  A short time ago we wrote about how Walter and Karen Hickey found the stones of 3 Daughters of Charity, the nuns from St. John’s Hospital, who served as nurse during the Civil War.  Obviously they could not leave well enough alone.  Spending Saturday and Sunday of last week at the cemetery they thought they would honor the Sisters by uncovering the sod that has gathered over their stones.  They did just that and then continued to do the other Sisters.

As they uncovered each stone in the Sisters’ lot they researched each name.  One young Sister died of influenza during the 1918 epidemic while treating patients in the hospital.  Others died of old age.  And then they found them- 4 more Civil War Sisters!  Like their confreres, two served at the Satterlee Hospital in Philadelphia and another at Fort Lincoln Hospital.

Walter and Karen have placed American flags on the graves of those who served.  Like many Civil War veterans not all of the Sisters were native born coming from Ireland and Germany.  Sr. Josephine, one of 8   Sr. Justine and was a nurse at Ft Lincoln in Washington DC.  Sr. Loyola was a German immigrant and was a sister for 42 years serving at Satterlee during the war.  All died while on mission to St’ John’s in Lowell.
children of German immigrants, joined the order at age 20 and served at Satterlee Hospital.

Today the Daughters of Charity’s lot is pristine and shows the respect these women, foreign born and American alike, who served their country and their mission to heal the sick.  What Walter and Karen have done recognizes that call.  In their name, we say thank you.  They do not ask for applause or wave a flag drawing attention to themselves, but go about their work quietly while making a mark on the history of the city.

A little note- The Daughters of Charity have asked for photos and documents Karen and Walter have collected for their archives.  Less than a week after all their work, we visited the site.  Already grass clipping have started covering the markers.  Last September a group of volunteers cleaned the Sisters of Notre Dame lot.  On our visit there barely a stone was visible.  We also found a second lot belonging to the SNDs, barely visible.  Something caught my eye and directly across is a small lot belonging to the SSMN (Sisters of St Mary of Namur).  These sisters operated Sacred Heart School.  The few stones barely peek out from the sod.  In early fall we ask for volunteers to clean the stones in Yard 1 to prepare for the tour.  We will need a team of people if we dare to include these new lots.
Posted by LowellIrish at Sunday, July 12, 2015 1 comment: