The Rites of Fall in the Acre 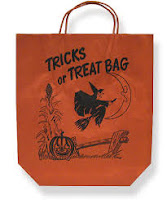 The best rite of Fall was Halloween itself. I don't remember buying a costume. I think I was a hobo from ages 5 to 11. When I turned 12, I revolted and was a vampire. I thought I was cool with a cape and blood dripping from my mouth. That's when I learned not to use red Magic Marker as fake blood. It was also a let down when a friend pointed at me and said vampires never wore glasses. So I took them off, and then looked like a blind vampire tripping on stairs and walking into doors. That was my last year of trick or treating.

What I remember most is getting my paper, orange, trick or treat bag from Greens in downtown Lowell. I think it cost a nickel. It was nothing more than an orange paper shopping bag, but by night's end it would hold a bounty of cavity producing treats. My Dad was often given the chore of walking with us. It often became a history of the Acre lesson. Being an Acre Boy himself, he'd tell me this is where he helped light the gas lanterns when he was a kid. Or this is where the Keyes sisters lived and he'd run errands for them. We'd walk by Lovejoy's mansion where UMass is now. Everyone knew it was haunted, and I'd walk a little closer to him. He'd pretend to see ghosts in the broken windows. One year right in front of Lovejoy's it started raining, hard, and my little trick or treat bag got soaking wet and broke. I was in a panic. Do I stop and pick up my candy, or do I let the ghosts drag us in to Lovejoy's basement and my mother would never see us again? I did what any 6 year old would do. I cried. My father said another prayer to Jesus Christ Almighty, put as much candy into my little hobo hands as could fit, picked me up, and walked me home.
Posted by LowellIrish at Saturday, October 29, 2016 No comments:


Sunday, the day of rest.  How we observe the Sabbath today is quite different than our 19th century ancestors did.  Or is it?  Today a Sunday afternoon might be watching the Pats with a Bud Lite (okay, personal preference here).  In the 19th century liquor laws were quite severe.  Having a libation might put you before the magistrate if you were caught.  In 1876 , a young Irish “lad” by the name of Caroline was found drunk by the seizure police (sort of a Sabbath police who checked on liquor imbibing on Sundays).  He told the officers where he was served in his alcoholic delirium.  Once he sobered up he swore he was only given birch beer.  Even though he was only 16 he was kept in jail until his court date later in the week.

Over at P & J O’Rourke’s on Gorham St. they “found five buffers who looked as though they were having a good time and improving the Sabbath.” They also found a young man concealing a deck of cards (another breech of the law).  At Tom Murray’s establishment he refused the officers entrance.  They were about to leave when someone inside tripped over a dog causing the officers to force their way in.  They took away quantities of gin and whisky.  On a good note at Peter McSorley’s, when the officers checked on him they found him “pleasant and polite as usual” and no violations.

Meanwhile in the Acre: “The seizure officers accompanied by two from the regular force, made a descent Sunday forenoon on a vacant tenement in Mack's yard, off Market street. There were more than 50 men in one small room, the officers say, drinking from a washtub of ale, which was being served in schooners as fast as it could be ladled out. Such a panic as seized the crowd the officers have rarely witnessed. They blocked the doorway, jumped through five windows and a trap door in their eagerness to escape, and in doing so prevented the officers gaining an entrance until the proprietor of the liquor also had escaped.  The officer found a barrel of ale, fixtures, the washtub full and four schooners full which had been left untasted in the crowd's panic to get away.  The place was being run by a man who did not get a license for his saloon, nearby, and he had chosen the unoccupied tenement to ward off suspicion.” (Lowell Citizen)
Posted by LowellIrish at Sunday, October 16, 2016 No comments: