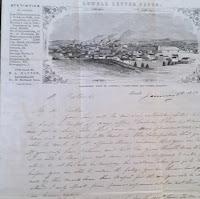 Before Fr. John O’Brien, of Fr. John’s Medicine fame, arrived in Lowell in 1848, he spent many years in the Virginia. He and his brother, Fr. Timothy, are given credit by historians for supporting the small number of Catholics and actually building the cathedral before they left to come to Lowell. During his time in Richmond, VA he befriended the Dooley family. John and Sarah Dooley were Irish immigrants and part of Fr. John’s parish. They were part of the small Catholic population, but had become wealthy by becoming merchants. Their son, John, grew to be an ardent Catholic, supporter for Irish freedom, and adherent to Southern secession from the Union.
John originally started his studies at Georgetown, but with the advent of the Civil War he sought to join the Confederacy. He had to wait until he was of age, but eventually signed up with 1st Virginia Regiment. He quickly rose through the ranks and eventually achieved the rank of Captain. He fought in the battles of Bull Run, Antietam, and Gettysburg. It was during Pickett’s Charge the he was wounded in both thighs and taken prisoner to Johnson’s Island, Ohio.
It was while he was a prisoner that he penned a diary of his life in the Confederate army and life as a prisoner of war. His journal is one of the most well-known accounts of the life of a Confederate soldier and life in a Northern prisoner of war camp. The reading is fascinating with details of camp life and the horrid conditions of prison life.
It was during his time at Johnson Island he wrote to Father O’Brien. Evidently the family had kept in close communication once the priest left Richmond to come to Lowell. There were several letters between the two men. Dooley was seeking Fr. O’Brien to intercede with the prison commander to gain his release. In 1863, Dooley received $50 from O’Brien, whom he calls his “generous hearted old friend,” in the hopes of obtaining a parole. The priest pleads with Dooley upon his release to come to Lowell “where I will have everything I may desire.” The plea did not work and Dooley suffers from his wounds.
Another account is when Dooley met a Union soldier from Lowell. The soldier shared that he was a parishioner of Fr. John’s. And the two spoke at length. At some point Dooley asks how the Union soldier can be fighting for the North when it was clear that the South was on the side of freedom. The Union soldier tearfully responds that he joined the army for the money. He returns with blankets for Dooley, and the two never see each other again.
Dooley finally gets word of his impending release and sends a final note to Fr. John thanking him for his kindness and saying farewell. Dooley returns to Georgetown to pursue studies for the priesthood. In 1873 his battle wounds weaken him to the point where he never is ordained, but is still buried in the Jesuit cemetery at Georgetown.
The book is available at: https://www.amazon.com/John-Dooleys-Civil-War-Americans/dp/1572338229
Posted by LowellIrish at Tuesday, January 23, 2018 1 comment: 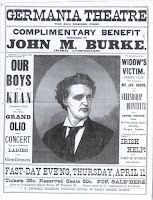 On stage he was known as Dublin Dan, the premier Irish comedian of American music halls in the latter half of the nineteenth century. Born as John M. Burke, he was a descendant of the great Guinness brewing family, he left his studies at Oxford to come to Boston to create a troupe of actors, singers, and dancers. This was the very dawn of the vaudeville age. Burke’s was not the only Irish musicale troupe of the time. Among others were MacEvoy’s Hibernicon, Harrigan’s Hibernian Company, and McGill & Strong’s Minstrel Company. Cities like Lowell had their “museums”, music halls, and opera houses. Some were quite legitimate, but most catered to the working class with earthy lyrics set to popular tunes. Burke’s career began in Boston in the 1870s making the Keith’s Theater circuit which evolved into engagements across the country such as New York City and Philadelphia. He married one of his troupe members who went by the stage name “Mrs. Annie Irish.” His advertisements which have survived give us an idea of what his show must have been like. For a mere 35 cents, 25 cents for children and 75 cents for orchestra seats, Dublin Dan would transform his audience from their lives of hard labor and meager living conditions to the lakes and fields of Erin. Through a series of hand painted tableaux spectators could see “a fresh and attractive array of novettes” along with the “Beauties of Ireland” and “the Lovely Lakes of Killarney.” A group of musicians and singers accompanied the scenes. Each took on a different character during the performance. “Erin’s Queen of Song, Miss Annie F Irish played the “Banshee Dearg.” There was also Patrick Fay as Shaun the Piper, James Shannon as the Coward Calanny, and B. Murray as the tourist. Of course the producer and director of Tableaux of Erin was John M. Burke as Dublin Dan the Guide. Burke’s advertisement claimed his show demonstrated the best of “minstrelity.” While Burke claimed to have made a world tour, he was known to have made several visits to Lowell, where he appeared at the Huntington Hall and the Music Hall. A reviewer of one of his performances in Lowell noted the admiration of the audience for Miss Annie Irish for her rendition of Moore’s Irish melodies. (Moore wrote The Minstrel Boy and The Last Rose of Summer.) It also noted the “active Irish boy” with his songs and closing with a “great acrobatic ending” which demanded an encore. The finale of the program was a jig performed by Dublin Dan and Miss Irish. Burke’s connection in Lowell does not end here. Many years ago in the attic of a house on Mt. Washington Street in the Acre was

found a gold topped cane. Inscribed on the cane is “Presented to John M. Burke, Irish Comedian, Feb 29th 73 by the Blumenthal Opera House, Prop. .... Wilkes-Barre USA.” The house at one time was owned by a family whose last name was Burke. Coincidence? Family member? No one knows for sure. Burke died at the age of 30 at the “Sisters’ Hospital” in Philadelphia. His wife quickly remarried another vaudeville performer. She and her children remained on stage for many years continuing Burke’s love of the theater. (Many thanks to Bill Mitchell for finding the cane and asking the right questions.)
Posted by LowellIrish at Saturday, January 13, 2018 7 comments: