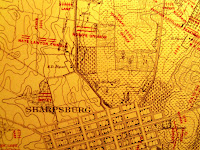 There is a sad beauty to the Cemetery.  Thousands of marble headstones with simple inscriptions of name and regiment line up like soldiers standing at attention.  The white markers on a field of green give a sense of peace, countering the tragedy of young lives lost.
Posted by LowellIrish at Friday, April 26, 2013 1 comment:

Any readers who are familiar with Saint Patrick's Church, the Acre, or O'Donnell's Funeral Home will certainly know the Corcoran family.  Dick and Mae Corcoran were well known and respected life-long members of St. Pat's, and many will remember their home on Wilder Street.  They and their crew of kids were involved in every aspect of parish life, and many remain so today.  This past St. Patrick's Day the Corcoran Clan was a major part of the musical program, "Everything Irish."

Two members of their family were severely injured in Monday's tragedy.  Follow the link to keep updated or to contribute to their medical bills.     http://www.gofundme.com/celesteandsydney

Posted by LowellIrish at Thursday, April 18, 2013 No comments:

I'm uncomfortable with the term "historian" when it is applied to me. Those are very dedicated individuals who spend much time researching and seeking how and why things happened. Me, I'm a collector of other people's stories- the good, the bad, the happy, the sad, the true, and the....... what we wished really happened. For a number of years I did oral histories with members of the community. It all started because of my Dad. As a kid we'd drive around and he'd tell me the story of the Acre Shamrocks and swimming in the canals, stuff that would make a great oral history. Unfortunately I never gave him the time to do a history with me. I've lost that chance.  I recall one story he shared with me.

When he was a kid living on Waugh Street in the Acre, a neighbor passed away. This must have been about 1925 when he was 7 or 8. His mother took him by the hand to attend the deceased woman's wake. He remembered seeing a wreath hanging on the door with a black crepe ribbon to announce to passers-by that the family was in mourning. He had never been to a wake before and had no idea what to expect. They walked into what would be called today the family room. The deceased was laid out in a casket, of course provided by O'Donnell's. The house was mobbed with family and friends. He remembered the gnarled hands of the deceased neighbor with the rosary beads intertwined. Candles burned at both ends of the coffin. His mother and he took a seat. There was no hope of escaping. The table before him had glasses stuffed with cigarettes and a bowl with clay pipes and tobacco. These were meant as tokens of remembrance from the family. The room where the deceased was laid out was quiet and reverent with mostly women whispering and nodding and holding lace handkerchiefs in their hands.

The kitchen was another story. People who came to the house brought plates of sandwiches or cakes. It overflowed with offerings. Of course there was the whiskey. Jugs of the "water of life" bought at local watering holes covered what empty space there was in the kitchen. This was the male's domain. Smoke filled the room. and the glasses were being passed around again and again. My Dad loaded his plate with food, and his mom quickly escorted him out of this part of the house. He sat in the back of the viewing room while his mother made the rounds with the other ladies. As he was eating off his plate he almost jumped out of his chair. In back of him was a row of old ladies, really old ladies. They were like a chorus from some Greek tragedy. In unison they started high pitch wailing that went on and on. A few other old ladies joined in. "She's gone. She's gone" Then there were a series of lamentations not in any words he could recognize. Followed by, "We'll never see her again." There were intercessions to Blessed Virgin Mary and all the saints. Then the wailing would begin again. Much later he asked his mother who they were and she said they were the keeners. Some were family members, but other were paid professionals whose job was to set the mood and recount the actions of the soul who had passed. It was a practice that had pretty much died away by that time, and maybe he wasn't aware that he was witnessing one of the last grand Irish wakes in Lowell. He told the story a number of times over his life, and said the sound of the keeners was something he always would remember.

Back at the wake, the mourners carried on until the priest arrived and then all the women got on their
﻿﻿﻿﻿﻿﻿knees for the rosary. The sound from the kitchen of the glasses being filled and refilled mixed in with the Hail Marys. This same routine would be carried on for 2 more nights. His mother walked him back home only to turn around and return to the wake. It was her job to "keep watch" the whole night with a few of the other women. They would spend the entire night with the deceased telling stories of her life and struggles and then begin the rosary again. "...... now and at the hour of our death. Amen"
Posted by LowellIrish at Friday, April 12, 2013 2 comments:

Making Their Mark on the City

The Seal of the City is familiar to most Lowellians.  The river.  The mills.  The bales of cotton.  They have all been well-known symbols of Lowell as the City of Industry.  A careful look through city documents shows that the Seal has gone through several changes over the decades; each one emphasizing a certain phase of the city’s evolution.  Often a cornucopia, a horn of plenty, can be seen in the sky, advertising the profits created by the mills.  In the 1880s and into the 1890s a new image is seen in the skyline, a church tower.  The steeple of Saint Patrick Church can be seen amongst the outline of the mills.  The 13th century gothic-style church had been completed in 1854.  Early visitors commented on the grandiose size of the church compared to the shanties, shops, and dwellings of the Acre.  The gold cross that adorned the top of the steeple could be seen from many points across the city marking the Irish presence in the City.  While the church was built in the middle of the Anti-Catholic panic of the 1850s, by the 1880s the Irish had assumed political power.  It was sending a message to the old guard.  Now it was the turn of the Irish to add their brand onto the City’s official seal for all to see.
The idea for this post came from Anam Cara honoree, Dick Howe Jr., who shared this finding during Dr. Mitchell’s presentation.
Posted by LowellIrish at Thursday, April 04, 2013 No comments: