A number of years ago there was a book that talked about the 100 places you have to visit before you die.  I have my own list.  One was to walk down into the Grand Canyon.  I did that twice (not to the very bottom, but considering less than 1% ever leave the rim, not a bad job).  Another was to visit Mesa Verde and climb the cliff walls and sit in an Anasazi cave.  Did it.  Also on the list was to visit my grandfather's birthplace in Milingivie, Scotland.  The farm on which he is born is now part of a massive condominium complex, but did it.  Also on my list was to visit Hugh out Cummiskey's home.  About 30 years ago when I first visited Ireland,  I came with a group of guys.  We drove across the country visiting as many pubs as we could.  I suggested that we go to Tyrone and maybe look for Hugh's home.  Needless to say the idea was unanimously vetoed.  That wish was never fulfilled until today. 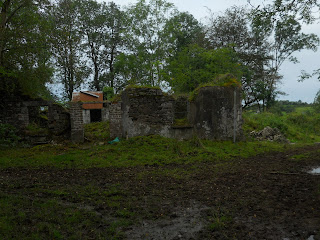 In 1817 Hugh Cummiskey left his home and came to Boston.  We do not know if he came alone or with relatives.  We can imagine his American wake being held before he left.  He walked out of this house knowing that he would never see his family or home again. 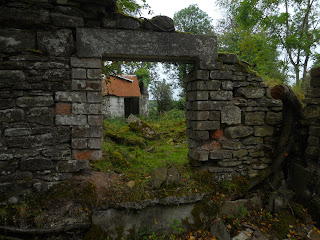 Here it is almost 200 years later and we're here to find out more about this man the city of Lowell claims as one of its favored sons.  The home is a great example of the typical Irish cottage.  It is probably from the mid1700s, stone held together by clay.  Part of the house would have had the family cow, kept inside for protection and to possibly provide some warmth.  The roof at the time would have been thatched.  The house was lived in right up to the 1980s when fire did some damage to the building. 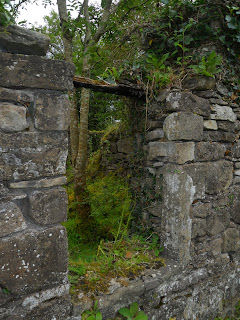 Originally it was a single room, but an extension was added at some point.  Out buildings were also in evidence.  In back of the house was probably the garden area where potatoes were likely the main if only product.  In back of the garden were grazing fields for the cows.  Those who lived there probably were subsistence framers, growing only enough to feed the family, and hopefully having enough to sell something to pay the rent or taxes.

What drove Hugh out?  Probably what was happening all over Ireland at this time.  Landlords, many of them absentee, were making demands on the farmers who had no choice but to pay or leave.  Maybe the night before he left he was given a proper feast with whatever the family had left.  Maybe some music was played and the poteen was passed (Hugh turned out to run a brewery in Boston).  But then the time came.  He said his goodbyes, walked down the lane.  maybe turned for the last time to see the place he called home, and walked into history. 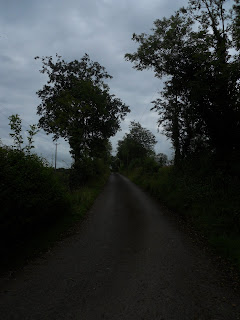 The team began digging 3 trenches.  The first layer of sod was removed.  Emily Murray joined us today.  She a member of the Queen's team. 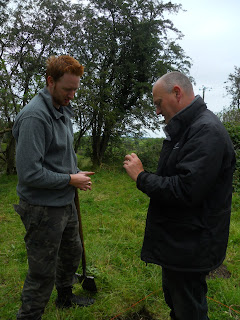 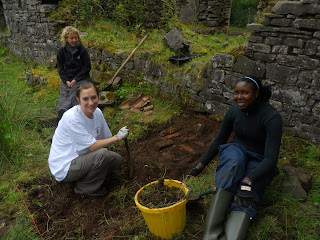 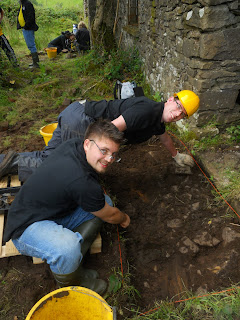 I was asked by Frank to add this next picture.  It is one of the few photos of him actually holding a shovel.  He said he would need proof. 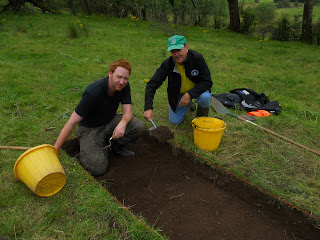 We also got to meet the present owner of the land Oliver Donnelly.  He has kindly let the team onto his property to carry out the dig.  His family has lived in Crossans for many generations.  We are fortunate to have someone who has such a pride in his heritage to allow the work to be done.  Here he is with Colm and Ryan. 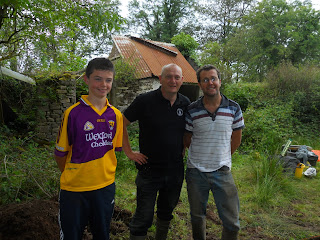