An American in Exile in Belfast

I think this says it all.

The Ulster Museum  explores many facets of archaeology, art, and natural science.  We saw examples of the giant deer that once roamed Ireland before man arrived.  Its antlers could be over 10 feet wide, the largest in the world.  There were also exhibits on the Spanish Armada, 18th century artists such as Turner and Gainsborough, and early finds in the Irish bog. 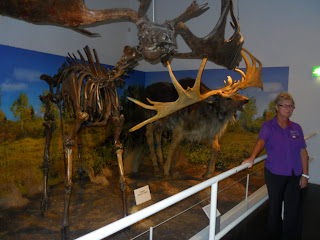 Knowing my passion for early Irish history, Stuart and Dermot took time out to be goodwill ambassadors to show us just a few of the many ancient sites right around Belfast.

The Giant’s Ring is an example of an earthwork’s monument built about 2700 BC.  In the middle is a tomb made of 5 upright stones.  This area was a ceremonial place probably reserved for the priestly class.  It might have been dug by hand using a period tool such as an antler horn. 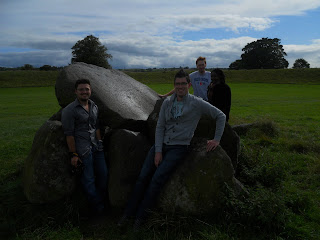 We then visited the remains of one of Ireland’s hundreds of high towers.  These were used in the invasion period to protect a site, maybe monastic, from a Viking raid.  The monks would enter the tower for protection, leaving whatever was outside to the fates.  The towers may also have been used for some type of storage. 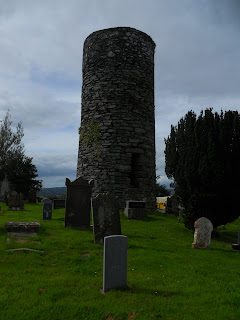 Another prehistoric structure we visited was a rath- a hill fort.  This one dates from the early Christian period of Ireland.  From here small clans would feel protected and could possible see enemies approaching.  You may note the cow in the photo, from which the group ran screaming (sort of).  It has a vicious look in her eyes if you ask me.  Anyway, there are so many of these Ireland has tried to index them all, but it is impossible to keep each one in the most pristine condition.

I’ve always liked ancient monastic sites.  This was the Benedictine Abbey of Nendrum.  What remains is the church area.  It’s located just a few meters from the coat.  One can imagine a silent Viking ship skimming along the water disguised by the morning fog.  A hoard of screaming Vikings emerge from the boat attack the small abbey, taking the gold chalices and patens, dragging sheep and cows to the boat, and kidnapping a few monks to be sold as slaves in other harbor towns.  No wonder the monks built several ring enclosures and had a tower from which a guard would be posted.  Calm seas and moonless nights meant the Vikings were about. 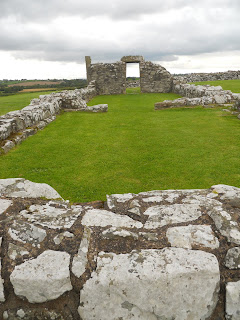 Tomorrow, we’re on the rocky road to Dublin looking for a flight.  This morning I visited St Bridget’s Church and lit a candle.  Let’s see if it works!