To everything there is a season…

I think it’s Ecclesiastes that says “To everything there is a season and a time and purpose under heaven.  A time to dig and a time to fill in.”  Okay, maybe that last part isn’t quite right, but it was the theme for the day.   The team take time to take the 2012 official team photo.  I say it each and every year, but what an amazing group of people.  The Partnership Program from UMass and Queen’s must be commended for this sharing that goes on.  The great part is that we shall meet again in Belfast in about a month.  Readers will remember that Hugh Cummiskey’s homestead (Lowell’s first memorable Irishman from the 1820s) was located in Crossan, County Tyrone.  The excavation that was started last summer in N. Ireland will continue again this year.  We’ll keep daily updates going once we build our wee currach and sail our way over, much like Brendan the Navigator did in 9th century.  To be able to make that physical and spiritual connection between Crossan and Lowell is a story waiting to be told.  We know so much more about Hugh than just three years ago when this project began. My day began with leading a group of teachers from the Tsongas Industrial History Center to the dig site.  Director Sheila Kirschbaum, Ellen and Shelley host teachers from all over the country each summer, telling them the story of Lowell.  Historian Gray Fitzsimons and I gave the Acre walking tour to show the working people’s perspective, focusing on the role immigrants played in the city.  Dr. Colm Donnelly and the team gave the teachers a first-hand account of the work being done on site and what archaeologists do. 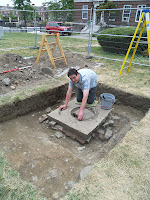 Well, well, well.  For the past week I’ve been mentioning, no, consistently dwelling on making guesses as to what could be under that big stone cap discovered last year after ground penetrating radar (GPR) detected an anomaly.  Hearth?  No sign of burn material.  Latrine?  Possibly, but unlikely.  Cistern?  Could be.  Well?  Could be.  And the winner is-----  a well.  Brian removed the small stones.  I asked in anticipation, “What do you see?”   And in the words of the finder of King Tut’s tomb, Lord Carnarvon, he replied, “I see wonderful things!”  And people say archaeologists have no sense of humor. 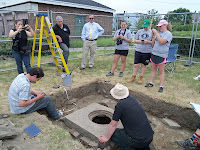 As usual with archaeologists you can’t get a straight answer as to dates and names, but you can make a few guesses.  The cap on the well is reminiscent to older street caps seen around Lowell.  This well might have been capped when the city was transferring over from wells to public water.  The well itself is lined with stone and brick and no perceivable mortar.  So our good Father McDermott had a well just outside his house.  Seeing that McDermott’s house was moved to this spot in 1840s, it’s possible that this well site predates that.  This could have been the well that supplied water to the shanties in the Paddy Camps.  How many women stood around here and shared the day’s gossip?  How many kids played on this lawn and lost the clay marbles we found?  Maybe some of that redware was from pottery that was dropped when a child was sent to get water for Da after a day’s digging. 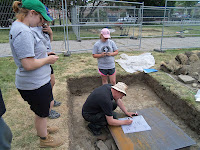 Then the shovels were broken out.  Each of us took our turn to fill in the holes that were opened just days ago.  The well was fitted with a heavy metal cap to ensure safety for many years to come.  But before it was closed, Colm had each of us sign a paper that will last for many years.  It detailed who was there and the years of our dig.  It was enclosed under the cap and the closing began in earnest.  This is the third season, and I always get a sense of a funeral.  This is not an end though.  There is so much work to be done.  Those bags of earth have to be analyzed.  The hundreds of artifacts are measured, recorded, and studied as to their place in the story of the Irish camps.  Friends like Walter, Karen, Grey, and Dick have spent the last year doing research in their areas of expertise.  Now we have a new series of questions to answer.  So it’s not an end, but a beginning.  We say slán abhaile (safe home) to our Irish partners.  See you next month in Crossan.