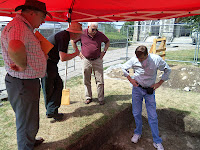 I’m starting to get the hang of it.  Archaeology is a science.  Now I knew that was a fact, but I didn’t understand it.  Every person who walks by yells out, “Did you find any gold yet?”  “Let me know if you find any coins.” The team sort of takes it on as their responsibility to stop and acknowledge everyone’s questions.  What most folks know about archaeology comes from Indiana Jones and the History Channel.  Stoppers-by will say what they saw on a TV program of a tomb in Egypt being excavated, or some sunken treasure trove being found off the reef of Florida.  I often have my classroom students read an interview with an archaeologist.  He shares that he would rather find a trash heap than a pharaoh’s tomb.  Why is that you say?  The tomb will tell you of the life of one man, the trash heap will tell you about the people living there. Though I have been waiting days, weeks, months to find out what is under that stone, every little piece of pottery, bone shard, or glassbeing excavated right around the stone is telling the bigger story. 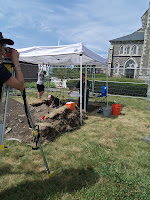 Science is a process.  Skipping steps will lead to false results.  My idea of bringing in a backhoe and lifting one big load of dirt may have revealed some artifacts, but think what might have been lost.  Just the placement of the artifacts can reveal when they were placed there.  Merely picking up a cattle bone says little.  They ate beef.  But examining that bone to see if there are butcher marks by a hand saw says even more.   I’ve picked up dozens of tiny pieces of glass fragments this week without giving them a second thought.  It was only today I discovered how slowing down and following procedure let’s you see bubbles and waves in the glass which determine date and purpose.  It’s all in the details. 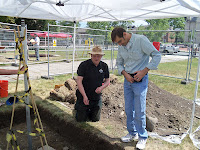 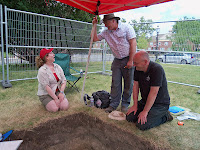 The place was crawling with archaeologists today.  Ed and Vic from the state examined the pieces found this week.  I wish I had more time.  Fascinating!  They could identify a small yellow piece of pottery as being from Vermont and its purpose.  A plain old red brick (to me) could be identified by its texture as to age and what it might be used for.  A piece of sheep bone now told us if it was lamb (a better cut of meat) or mutton.  Sueanna, a geo-archaeologist also spent part of the day.  She studies dirt, yes dirt.  Where I saw some colored dirt, she saw a plow trough.  That means they were down to the level maybe predating the Irish when this area was part of Fletcher’s farm.  The analysis of the pollen and seeds in the soil will tell more of what was being grown and eaten in this period.  There were also visitors who stopped by who shared their family stories.  Priscilla’s family were the McOskers from Dromore, N. Ireland, so close to Hugh’s home.  The Doherty family from Charelstown may have been part of Hugh’s work crew. 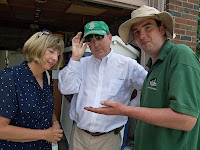 Towards the close of the day, Brian’s pit found a partial clay pipe bowl with an image of what looks to be a church.  Quite a unique find and needs to be investigated more. 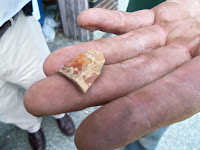 Tomorrow the well cap come off?  Or does it?  And tomorrow the dig on this side of the Atlantic ends.
Posted by LowellIrish at Thursday, July 19, 2012