A Memory & Some Notes


One of the goals of this blog is to hear from you, whether you are an “Acre”-ite or just someone passing by on the web highway.  The counter shows over 12,000 viewer;, we sure would like to get your input.  We know there are stories out there, and it’s time they get recorded.  Just yesterday a  friend  mentioned he had graduated from Keith.  I knew that part, but did not know how often he had been “disciplined” while attending the school.  Yet today he is a respected teacher.  (I withhold his name to save his reputation.)


After we researched the Boys School entry, Walter was able to add a personal note. 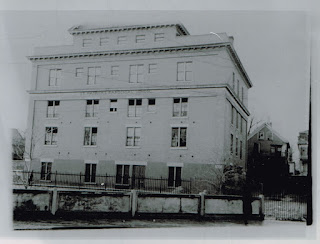 My interest in St. Patrick's Boys' School was heightened when I came across some photos my father had taken just before it was demolished.  Attached is a view of the Suffolk street facade.


He also took a picture of the rear of the building.
In the course of researching the school, I found a Lowell SUN article dated May 18, 1900 about the re-opening of the school scheduled for September.


“The younger pupils who always make up such a large number of the scholars will be under the charge of the Sisters of Notre Dame and teachers from the academy will be assigned to look after the young folks.  It is proposed to make a slight change in the school because of this arrangement.  A new entrance will be made at the rear of the school building and this will be accessible from Fenwick street.” 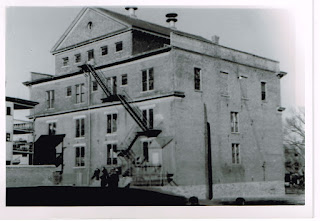 The picture to the left shows the rear of the school with the aforementioned entrance, and I do believe the figures in black entering are indeed some of the Sisters.


A few weeks ago I met Eric at Open Doors.  We had quite a few visitors that day, but I noticed the detail with which he was viewing the art and architecture of St. Patrick’s.  We chatted for a while and found out he has a particular goal of creating a photographic survey of the city.  Please take a look at this herculean task he has taken upon himself.  Not only do I commend his efforts for helping St Pat’s and other places to record our stories, but notice the art he creates with his camera.  Many thanks, Eric.  You use your talents well.  Here is where you can see Eric’s work at St Pat’s http://commons.wikimedia.org/wiki/Category:Saint_Patrick_Church_%28Lowell,_Massachusetts%29, and the wider city http://commons.wikimedia.org/wiki/User:Emw/gallery

I have been waiting 12 months for this.  My little countdown clock has been ticking away second by second.  No, it’s not Santa’s arrival at Christmas.  It’s better than that!  THE BIG DIG III is one week away.  The four Irish archaeologists will be arriving Saturday.  On Sunday will be a field trip to see a 10-footer, a house somewhat typical of the 19th century and reminiscent of what our shanty might have looked like.  Then the fun begins!  The Dig will commence on Monday and finish up on Friday.  What will be found this year?  What new secrets will be revealed?  What will our old house tell us about those Irish pioneers?
Posted by LowellIrish at Sunday, July 08, 2012