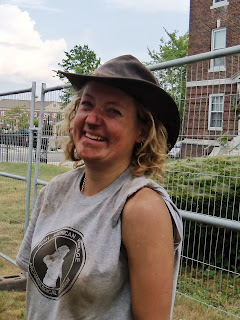 I think this picture says it all.  The heat was in the mid 90s (That’s 35 C for European readers.)  Humidity was 63%, in the danger zone according to Nat’l Weather Bureau.  That set the heat index at 110 degrees.  The seven diggers went through almost 40 bottles of water.  And tomorrow predicts higher temps.  With the summer heat baking the ground hard, cutting through the sod took a good part of the day.  I’m not sure if Dr. Emily Murray knew what summer in Lowell could encompass, but she quickly found out. 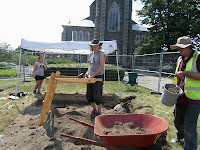 The team of four archaeologists from Queen’s University, Belfast, N. Ireland and three students from UMass Lowell put their shovels in the ground at 9 am.  Dr. Colm Donnelly decided to reopen Trench 3 from 2011.  Readers may recall this is the pit with the potential cistern stone.  The pit is being widened to uncover more of the stone and to get a better idea of the cistern’s placement.  They are looking at data from the soil to see if it would have been located inside or outside Fr. McDermott’s house (called a “shanty” in the period newspapers).   By day’s end, the diggers were anxious to get to the next step of opening the cistern.  Small artifacts such as redware pottery shards, oyster shells, and pipe stems were uncovered. 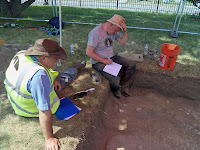 Pit 2 from 2010 was reopened.  This was the pit that was described as the garbage heap two years ago.  Soil tests from last year suggest that there may be something under this layer.  Considering that written evidence exists that this area was once quite crowded in the early Irish immigration period of the 1820s and 30s, the soil tests could be pointing the way to some of the earliest dwellings of Irish pioneers in Lowell. 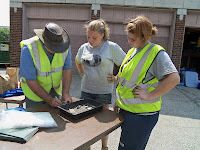 I suggested that a backhoe would have done in minutes what took the entire day.  But these are professionals and recognize that every stone, every layer of soil, every piece of slag, pipe stem, or bit of coal tells a part of the story.  Each find dictates careful recording of location and type of material.
While I sat in the shade, Brian Sloan from Queens was singing Wild Colonial Boy as he widened Trench 3.  The sound of shovel after shovel hitting rock filled the summer air.  If you closed your eyes you could almost be taken back to 1831 when the Western canal, which runs along Suffolk Street, was being dug by the first Irish to meet up with the earlier Merrimack Canal.  You could see them bent over their shovels and hear their tunes as the workers labored on.  Perhaps our foundation stone was part of that debris dug out at that time?

Have a question for the archaeologists?  Send them along and we'll find an answer for you.
Posted by LowellIrish at Monday, July 16, 2012