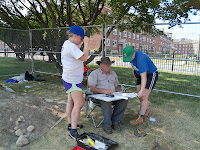 “The job of an archaeologist is to dig a hole just to fill it in again.”  With temps reaching just about 100 degrees, the quote from Dr. Harry Welsh sounds rather dismal.  But the work continued nonstop today.  The team from Queens may be wishing for a little bit of “soft” weather.  Ami, Katie, and Marcelle, from UMass, will find today’s weather quite different when they have to bundle up and put on their rain gear when they get to Crossan in August.  Sarah, from last year’s Irish team, informs us it rained all day today in Tyrone. 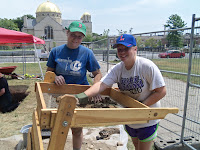 To an outsider,  two open pits may not be very exciting.  A closer observer would see things were moving along.  Harry, Katie, and Ami worked on the “trash heap” pit.  The area that was uncovered in 2010 was thought to be a yard where debris was deposited.   That team brought part of the pit down to another level.  There’s more to be done, but the evidence possibly shows this was an earlier layer than the McDermott house.  Could this be the actual yard that Hugh himself tread upon? 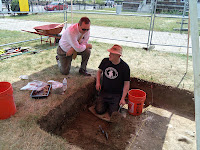 In Trench 3, Brian Sloan, Emily Murray, and Marcelle spent the entire day uncovering the cistern.  In doing so each shovel full of soil had to be sifted.  The results were not surprising, a lot of redware, transferware, and coal.  Not exciting, but think what it says about the residents of our house.  We get a better idea of how they were heating or cooking, and what they were eating off of.  With the cistern being cleaned off, there’s excitement in the air.  Will the cap be off tomorrow? 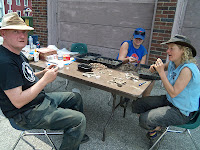 Emily Murray was able to take a closer look at the bones and shells discovered in 2010.  Emily is an expert in those fields.  Many of the oyster shells are cracked and broken, possibly signs of being broken open.  There is an Oyster House listed in the early City Directories.  Could this be where they were from?  You can imagine after a backbreaking day of digging, our Irish pioneers would enjoy a plate of oysters and a beer.  Beer was often sold out of people’s houses, not necessarily a bar.  You would bring your bucket to whoever sold the beer and carry it home.  There is a newspaper article accusing one house of selling beer to women.  Massachusetts went through several period of who could buy or sell beer.  Emily also examined the animal bones found in Year 1.  We knew of the cattle bones, but she also identified sheep and a few pig.  This is interesting since we have 2 accounts of pigs running wild in the Acre and people being told to bring them inside.  One might consider there would be more pig bones.
Who know what tomorrow will bring?  Cool breezes?  Open cisterns?  A stoneware jug with Hugh Cummiskey's name on it?

Ask the archaeologists a question?  Send along a comment.  Let us know your interests.
Posted by LowellIrish at Tuesday, July 17, 2012