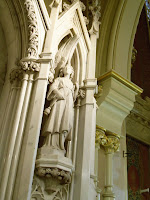 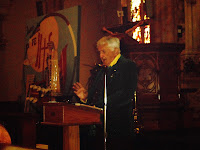 Today's talk, Glorious Gems of Lowell: Patrick Keely's Legacy, which was part of the Parker Lecture series, brought an interested crowd to St. Patrick Church.  Founder and president of the Keely Society, Ted Furey, is a bit of a gem himself.  Ted is a treasure trove of information on the life of one of America's most famous immigrant-architects, Patrick Keely.  Ted is an artist and educator and has personally visited many of the remaining Keely buildings.  Thanks to Ted, an archive of photos is being built to record the remaining churches that were designed by Keely until his death in 1896, and later taken over by his son-in-law.  Because of age and neglect, many Keely churches have fallen into disrepair and have been razed.  Ted also is the director of the museum that tells the story of the Cathedral of the Holy Cross, another Keely gem.  Ted, who lives in Connecticut, is no stranger to Lowell and has photos of other local Keely churches, such as Immaculate Conception and St Jean Baptiste.  Keely also designed the chapel of the Sisters of Notre Dame at St. Patrick's, and after the 1904 fire it was his 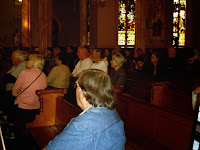 firm that did the reconstruction.  Ted casually looked around the church and quoted who did the carpentry; what firm made the windows; and even the style number of the stations of the cross.  Looking up at the side altars, Ted shared how difficult it was for the sculptor, Sibbel, to create the angel figures with the upright wings.  His passion and respect for Keely's work is obvious.  I wish we had a few more hours with him.
Posted by LowellIrish at Saturday, November 02, 2013