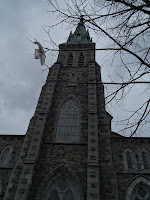 When Father John O’Brien was assigned the pastorate of Saint Patrick Parish he knew the assignment would not be an easy one. The previous pastor had lasted about a year and asked to be removed. Let's just say life in the Acre was not easy for him.  It was 1848 and the famine Irish were filling the tenements and hovels of Lowell’s Acre neighborhood. Just a few doors down from St. Pat’s could be found St. Mary’s church. Was there really a need for two churches within yards from each other, or were other things going on within the tight knit, but often divided, community? What he found when he arrived in Lowell was not good. Those who remained at St Pat’s were very much the poorest of the poor. The neighborhood was riddled with tenements and shanties. The odors of open garbage and sewers permeated the mishmash of what was supposed to be streets, but looked more like  alleys. Most dwellings were overcrowded with more new people arriving daily. On top of all this the church was in poor condition. Though less than 20 years old there were problems with the building and with a growing population, Father John, as he was lovingly known to his congregation, knew he needed to do something grand to unite his people and give them a vision of what could be done.


He came up with a plan, actually several plans. He would eventually build a school for the neighborhood children. Education would lead the Irish into the mainstream. He also would want something done about health care; a place where the sick could go to be cared for. But his piece de resistance would be a new church. Not another small wooden one, but one that would announce to Lowell and the growing anti-Irish bigots that they were here to stay. He would build the grandest building Lowell could claim. There was only one man whom he could entrust to do the job- the Irish born architect, Patrick Charles Keely.

Coincidentally, or was it, both men were born in County Tipperary, but it was Keely’s growing reputation as an ecclesiastical architect and builder that fostered his reputation. By the end of his life he would design over 600 churches and hundreds more rectories, schools, and municipal building up and down the east coast and west to Indiana. He was especially well known in the Archdiocese of Boston as the designer of the Cathedral of the Holy Cross. At the time he visited Lowell, he was also working on the Church of the Immaculate Conception in Albany, New York. The two churches look amazingly similar with mild differences. This was a method employed by Keely as his popularity grew. Each church had its own unique style while maintaining a basic set of plans. This saved the parish money by using and reusing design plans with minimal changes. Keely would have left the plans with the church. In St Pat’s case these went missing decades ago. We are told that Keely made at least one visit to the Acre site, and the Sisters of Notre Dame employed him to draw up plans for their own school which needed expansion. In the spring of 1870, he designed a new chapel for the Sisters at the cost of $5000.
St. Patrick’s was not the only Keely building in Lowell. He also designed St Michael’s, St. Peter’s, St Joseph's extension, and the Immaculate Conception. Keely also offered a package deal bringing other artisans with him. For example, the murals in St Pat’s were done by Gustav Kinkelin. The altars were designed by the Joseph Sibbel Studio. When St. Pat’s suffered fire damage in 1904, Keely’s firm was once again called in to repair and improve the church structure. His son in law, James Houghton, had taken over the business and completed the renovations, employing local workers and quarry men when needed.

﻿﻿Keely’s Irish birth; his strong Catholic faith; his practice of hiring locals; and his reputation for honesty made him the first choice for many parishes and bishops. He is buried in Holy Cross Cemetery in Brooklyn, NY with a rather plain marker with just his last name to mark his resting place. He worked right up to the end, still refining plans and details until his death in 1879.
Posted by LowellIrish at Thursday, October 24, 2013

Email ThisBlogThis!Share to TwitterShare to FacebookShare to Pinterest
Labels: Church, School, The 1800's, The 1800s