An Acre Memory - the Day JFK Was Shot

If my memory is correct it was one of those grey days of November.  Our teacher was Mrs. Dalton, the sole lay teacher for many years at St. Patrick’s School.  Mrs. Dalton’s daughter came driving up through the school yard honking the car horn.  She drove passed the steps of the school right under our classroom window.  Mrs. Dalton bolted to the window and opened it.  “He’s been shot.  The President’s been shot!”  The date was Friday, November 22nd 1963.  The classroom had just had a large black and white TV installed in the class.  Mrs. Dalton turned it on to see the grainy pictures coming in from Dallas.  The TV anchormen were getting mixed reports from their sources.  Mrs. Dalton left the class, probably to tell the nuns in the other classrooms.  Finally, the moment we all remember, Walter Cronkite made the announcement that JFK was dead.  Within minutes the bell of the church began to toll and kept up until it was time to go home.
I ran into the house expecting to break the news to my mother.  She was standing at the ironing board in the kitchen positioned so she could see the TV in the living room.  She was openly weeping.  I don’t think the television was off over the next 4 days.  Our usual Friday night trip to one of my aunt’s for the weekly card game was cancelled and replaced with my mother announcing we should all say the rosary for the repose of President Kennedy’s soul.  With the TV still on, we knelt by the couch and said our Hail Marys.   Instead of ending each decade with the Glory be, it was replaced with, “Eternal rest grant unto him O Lord.”
This all was happening while my dad was wallpapering the TV room.  We watched while Lee Harvey Oswald was arrested.  We watched while the crowds lined up for the viewing in Washington.  We watched while Jackie made her visit to the coffin.  On Sunday the wallpapering was nearing completion.  My folks had set up a card table in the living room, and we were given a rare opportunity to eat in front of the television.  The spaghetti was just served when my mother gave out a scream as we saw Jack Ruby shooting Oswald live on television.    No rosary was said for him. 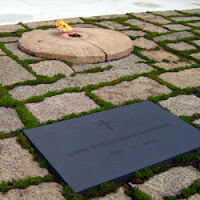 One sound I and others will never forget would be the roll of the drums during the funeral cortege.  Catholic churches around the country had funeral Masses said for JFK on the Monday that he was to be buried.  St. Patrick’s was draped in black.  Six tall candles surrounded a coffin meant to represent the dead President’s.  The priest processed out clothed in their black chasubles.  We rushed home to follow what was going on in D.C..  There was Richard Cardinal Cushing with black cope incensing the remains.  Again the roll of the drums.  The salute of the young son.  The lighting of the flame.
The following day Sister Clair Cecilia announced the all the children would write letters to Mrs. Kennedy to express our sadness.  I remember telling her how proud we were to have a Catholic president and that we would pray for her and her family.  I ended by asking her to send me a pair of his rosary beads and I would keep them safe.  She didn’t answer.
Tucked away in a box in the cellar is a copy of the newspaper of the day he was shot.  There’s also a prayer card with a black border and a book called Four Days.  My mother said to hold onto them.  You will want to remember what happened.  Fifty years later I still remember.
Posted by LowellIrish at Wednesday, November 20, 2013