Ireland has long been known as the home of saints and scholars.  While Dr. Mary McAleese may not be canonized, she certainly embodies the qualities of both.  Dr. Bob O'Neil and Michaelene O'Neil, alumni of St Patrick School, extended the invitation to the former Irish president to visit the parish.  Her presence was genuine and warm; she put all at ease.  This woman, who was twice the president of Ireland, led the peace process, stands as a model for women leadership, and a devout Catholic made all her met her feel as if she had known them for many years.  Fr. Dan and Fr. Paul along with a group of other OMI priests welcomed her to the rectory where she took time for home made cookies and chat with the staff.  She then was taken on a tour of the Acre where she made connections with her own birthplace in Belfast and the mills of that city. 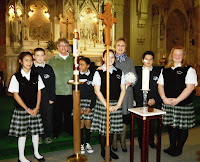 After being introduced by Mayor Murphy, Dr. McAleese then addressed those who came to hear her.  She spoke of Patrick, peace, reconciliation, and Pope Francis.  The children of St. Patrick School joined her to light a peace candle in the church where it will be kept burning.  A small plaque next to it says, "So that justice and mercy may prevail in our world."  This is a quote that Dr. McAleese shared after the attack on September 11th.  It was a moving sight to see a former President with children lighting a candle in a church that has been home to so many immigrants.

This entire evening was made possible by cooperation between so many groups; the Irish Cultural Committee, UMass Lowell, AOH, and the Ladies Sodality of St Patrick Parish.  The culmination was conferring of an honorary doctorate degree by Chancellor Marty Meehan at the UMass Lowell's Inn and Conference Center.  We cannot close without saying our most sincere thanks to all involved.  This is a fine example of how Irish culture lives on in Lowell. 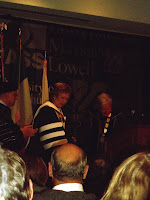 As we walked the grounds of the church it occurred to me that a former President of Ireland was standing on the same ground that her fellow countrymen and women built their shanties nearly two hundred years ago.  We were honored to have her as our guest, and pray that her words will remain with us.
Posted by LowellIrish at Friday, November 08, 2013