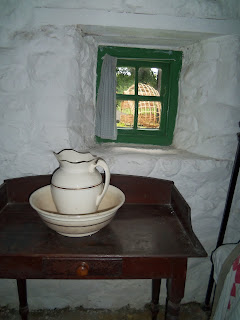 So what was the Ireland that Hugh left behind like?  After traveling 3000 miles on an overnight flight and then another 2 hours by bus before 9 a.m., we found ourselves in Belfast, N. Ireland.  Today’s focus was on what Hugh left behind.  Our visit to the Ulster Folk and Transport Museum put things into perspective.  The Museum can be compared to Old Sturbridge  Village, but on steroids.  Last year’s visit to NI included a trip to the Ulster Irish American Folk Park, which was phenomenal.  This place supersedes it.  In the rural areas where thatched cottages of potato farmers had wisps of smoke curling out of the chimney, the smell of the peat fires welcomed you into the small kitchen.  The soda bread was right out of the skillet with freshly turned butter.  I wondered if my jet lag was catching up to me.
As one progressed into the more rural area the strong black soot of burning coal permeated the landscape and the inevitable change from cottage life to trade shops and market days was made evident.  Time marched on, even in 19th century Ireland.  This was very much Hugh Cummiskey’s world.  And our initiation into that period of time and evolution in Ireland, only made us wanting to know more.  What is unique about our study of Hugh is that he is the average man.  He surely would have known the farms and fields we crossed today.  He would have been at home on any given market day in his small township of Crossan.  Hugh never grew to be wealthy or any great statesman, or played a major role in a historical event.  He is everyman.  The life he led on his farm, and then the road he took to town to leave and never come back, is the same story so many of us could tell of our ancestors. 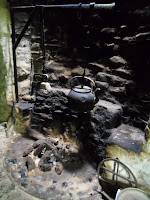 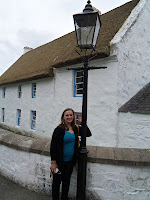 Tomorrow the pilgrims return to the site – Crossan, Co. Tyrone, the Cummiskey Homestead.