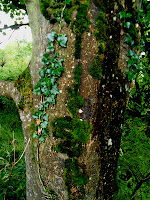 This evening I sat in the pub with my bangers and champ (potatoes with chopped scallions) capped off with a pint of Guinness.  I sat there with a good book while the horse races were on TV.  Looking out, the sky was blue with big billowing clouds, and, wait for it, no rain.  Could life be any better?  When I was in second grade, Sr. Francis St Michael told us that heaven was a place of never ending ice cream.  Obviously she never experienced where I am now.  Besides I’m lactose intolerant, so the prospect of eternity with ice cream was not very inviting. 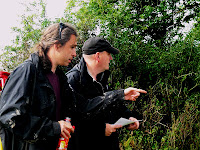 The day’s dig began with rain and ended with sunshine, a needed respite for us all.  The pit is partially located under an ash tree so there is a lot of digging and cutting followed by digging and cutting.  The work can be quite tedious, but necessary as each millimeter of soil that is cut away reveals more of the story of this plot eighteenth century home.  Colm is searching for the differences that can be seen between wall and floor and yard.  He taps the surface with the handle of his trowel.  He examines the texture of the soil.  He looks at the alignment of the rocks.  All these things speak to him in a language only an archaeologist, and a bloody good one, can understand.  Me?  I’m under the ash tree watching young Hugh doing his chores, leading the cattle from one pasture to the next, weeding the potato garden, and when his folks say he is done, he runs up the hill to investigate the fairy ring. 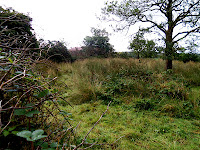 The fairy ring- we were warned before we entered the circle of mounded earth.  It’s a well known fact that the fairies don’t like their home to be disturbed.  Just up the road from the Cummiskey homestead is just such a structure.  They were built as a rath, or ringfort.  They are dotted all over Ireland.  Often built on mounds they were used during very early Christian times , about 700 AD, as a type of fort to protect cattle and be able to watch over the land around the fields.  As time passed the myth of the fairy ring grew.  Many people still respect the hills, whether as a superstition or reverence for the past is up to them.  The moment we got to the top the most torrential rain of the week began.  We made our way off the ring and the rain subsided. 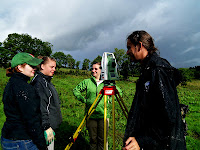 Ronan McHugh came to do a topographical survey of the homestead.  The students helped him plot out the coordinates that can overlayed to earlier maps to show more precisely where buildings existed.  He is the principle surveyor for the Centre for Archeological Fieldwork.  His major work deals with the medieval period, but has worked 2 seasons in the Lowell project as well.  When Ronan was done with his work, he went onto his next job, and he took with him Victoria Denoon.  Her job at UMass is waiting for her.  We will miss them both.
Posted by LowellIrish at Wednesday, August 22, 2012