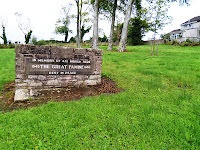 Before leaving Irvinestown we made a stop at the Famine cemetery.  Here lie buried an untold number of those who died during the potato blight of 1845-1850.  There are no markers and no names even if there were.  The workhouse associated with the cemetery merely had those same workers  dig pits without benefit of a coffin.  Further into the village the Catholic church has erected several small houses that have full sized, carved, wooden statues of Celtic saints.  Together they tell the story of the men and women who helped define Ireland as the Land of Saints and Scholars.  Colm brought us to his home where his wife Eileen made us welcomed with tea, soda bread, and croissants.  We also met their three children (Abigail, Jude, and Saul) and the family’s small menagerie of pets. 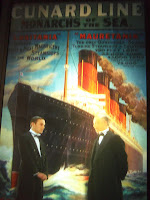 The afternoon brought us to one of Belfast’s newest attractions- the Titanic Museum.  The focus of the exhibit is the role the city of Belfast played in building the ship that was unsinkable.  The sheer size and shape of the building is reminiscent of the ship itself.  In the exhibit area, the technology puts you right into the streets of Belfast in 1911 and into the workshops of the metal workers and riveters.  The tragic sinking is made more personable through first-hand accounts of the SOS calls and diary entries of the survivors. 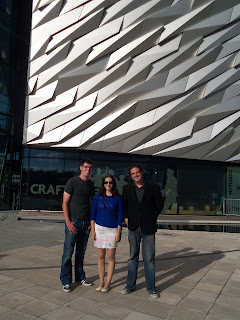 One of the best parts of the entire trip was what happened just before the end of the day.  Who should arrive at the museum but, Brian, Dermot, and Sarah, later joined by Stuart (and Rachel).  These folks were part of the previous Lowell and Crossan digs.  They took time out of their personal lives to greet us.  That is the spirit you meet over here.  I hope they know how much I appreciated their visit.  It was just a year ago Stuart stood outside Kelly’s reading his Dad’s poetry.  We all gave a round of applause.  For just a moment we were one, and for a short time we were again this year.  Coming to Ireland is always special and has deep meaning for me, but it is overshadowed by meeting Colm, Eileen, Harry, Ronan, Emily, Brian, Victoria, Sarah, Dermot, and Stuart.  I raise my glass to them (even if it is a pint of Haarrp).  I say, “Go raibh maith agaibh!”  Until we meet again.
This is the last posting for a bit.  Tomorrow we fly home and the realities of life return.  Send a comment if you wish.  Thanks to all those who followed.  Cheers!
Posted by LowellIrish at Saturday, August 25, 2012