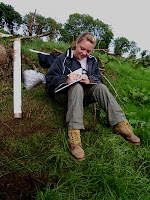 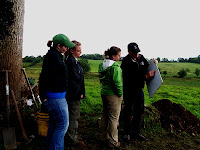 We knew today was coming.  It was inevitable.  One side of me says, “Just a few more days.”  The other side says, “Home.”  The fairies up at the fort must have been giving us their blessing.  Grey skies turned sunny as we began our final tasks.  I’m sure the cows will be glad as well as they will have their field back.  The task of measurements, which will be part of the final publication, was made.  Much of what is done is for future reference and analysis.  Colm worked diligently on his diary detailing context layers and finds.  Soil samples were taken for analysis.  And then the pit was filled in. 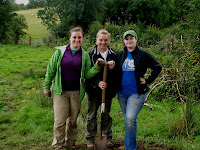 When I left this place last year, I envisioned Hugn walking solemnly down the Crossan Road, alone and with an unclear future.  As we closed the gate on the pasture today I had a different vision.  I saw Hugh walking briskly down the road, a man with a vision.  I have an idea he may not even have been alone, but with a brother.  And he knew where he was going, and knew his future would be bright.  For, as we find out, Hugh always had a plan of some sort. 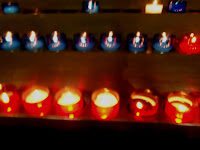 The afternoon brought a trip to Enniskillen Castle.  Originally built in the 16th century it was later used by the Royal Inniskilling Fusilers.  It was built by the Maguire clan and later lost during English rule.  The collections detail the history of the Maguires and early Ireland, and the Fusiliers.  We also visited the town itself.  At the top of the town is St MacMartin’s Cathedral, Church of Ireland.  This is where Queen Elizabeth II made her recent visit.  It was a groundbreaking even in Northern Irish history.  We then crossed the street to St Michael’s Catholic Church, where the Queen also visited.  I lit a candle thinking of my family back home, the good folks whom I have made this journey with, those who have made it possible, and Hugh.
On to Belfast.
Posted by LowellIrish at Friday, August 24, 2012