The recent snows made the roads difficult to pass through, but the hardy souls celebrated Saint Patrick as they had for years by parading through the streets of Lowell.  The year was 1843.  The account of the day’s festivities was recorded in the Courier.  The Irish carried with them 2 green, silk banners; one with the American eagle and the other with the Irish harp.  “A fine band” played tunes as they marched through the neighborhood and into the city proper.  The marchers wore green, silk scarves with green and white rosettes.  Mass was celebrated at St Peter’s that year, then the little group proceeded to the Merrimack House to feast.  Until late in the evening, the men offered toast after toast.  They lifted their glasses to the ideals of democracy and liberty.  They remembered their homeland and their new home too.  They recited poems and sang “Garry Owen.”  The reporter included “all was carried out in an appropriate manner.”  (Note: at an earlier celebration the reporter commented that no alcohol was served, just cider, and very little of that was consumed.)


The article closed with mention that some “blackguard” had made a stuffed effigy of Saint Patrick and placed it on Lowell Street “for the purpose of insulting our Irish citizens.”  To his credit the author states that whoever did so should have spent his time “in stuffing his own head” with the ideals of “good breeding and gentlemanly decorum.”


Thankfully in 2012 we don’t have effigies of the Saint, but this year’s hot item for St Patrick’s Day is a t-shirt from Urban Outfitters with a figure vomiting shamrocks.  And that’s how we display our culture.


Today the Irish Cultural Committee of St Patrick Parish started off their celebration in much the same way their ancestors did.  It began with liturgy, then the parade through the streets and feasting after raising the flag.  Some things don’t change too quickly in the Acre.  If you’re interested in joining any of the activities coming up check out their Facebook page or check elsewhere on this blog. 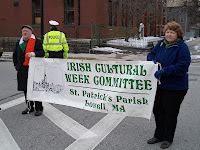