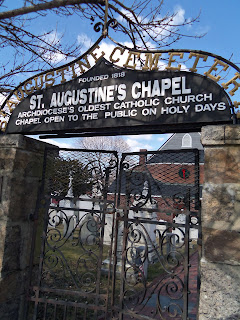 Whenever I see a sequel for a movie being promoted, I always tend to shy away from seeing it.  The second time around can never be as good.  So I was a little weary of Road Trip Two to St. Augustine’s Cemetery in South Boston.  You might remember that Dennis Crowley would cart Lowell’s early Irish deceased from Lowell to either Bunker Hill Cemetery or St. Augustine’s so they could be buried in consecrated ground.   Not sure that Mr. Crowley would hit the traffic Walter and I encountered on 93, but he certainly took more than the 90 minutes it took us to get there. 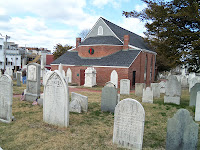 The Cemetery is located in the densely populated section of Boston, known locally as Southie.  The tenements and houses are tight packed.  The tricolor is flown from several porch railings.  Store signs, pubs, and restaurants carry on the Celtic theme.  Much has been written about Southie, good and not so good, but you have to admire the tenacity of the people who have kept the chapel open with a full calendar of weddings, funerals, and weekly masses. 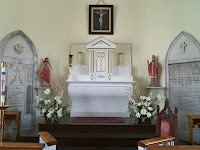 The chapel at St Augustine’s is the oldest Catholic structure in the Archdiocese and probably far beyond.  The burial ground was begun in 1818.  Boston’s City Fathers had finally given permission for the French and Irish Catholics who had immigrated to the city to finally have a burial ground of their own.  Anti-Catholic sentiment was running high and this meant that Catholics had made a permanent mark on the city landscape.  Father Francis Matignon, an immigrant from a rather wealthy family in Paris, was for a time Boston’s only priest and much beloved by the Catholic population.  His dear friend Bishop Cheverus had the chapel constructed in memory of him.
The Cemetery and chapel are surrounded by a large ornate metal gate built upon a granite base.  The large gates open to a meticulously groomed area that just a few years ago was overgrown and stones were falling over.  The keepers of the Cemetery have righted stones and cleared paths.  Today, the main gate actually opens to the rear of the chapel.  The stones face in an easterly direction.  There is an old practice that stones face east towards the rising sun, a symbol of the Resurrection.  On the exterior of the chapel wall are the marble stones of Fathers Mahoney, O’Byrne, and O’Flaherty.  Father Byrne was the circuit priest for a large area north of Boston.  He was stationed at St Mary’s in Salem and would make a monthly visit saying Mass at the site across from the Pollard Library today.  It is said people cried when he gave his sermon in Irish.  Father Mahoney was the first pastor assigned to St Patrick’s.  After his service in Lowell, he was assigned to Holy Cross Cathedral.  Father O’Flaherty was the speaker at the dedication of St Patrick’s in July of 1831.  How fitting these three lie side by side after serving together for many years.
The interior of the chapel has maintained its simple Gothic design and has been lovingly restored by neighbors and friends of the Cemetery.  The altar area has numerous marble slabs dedicated to the many priests who pioneered the beginning the Catholic presence in New England.  One really feels the sense of history and the sense of care and reverence which keeps this site open.  The chapel interior is simple in its wooden altar and tabernacle with small shamrock cut out.  Walter pondered the idea of this chapel very likely being built in a similar style to the original wooden, St. Patrick Church of 1831.  This seems quite possible since the connection between the two places was so close.


Our original intent in visiting St Augustine’s was to identify the graves of Lowell Irish who were interred there before St Patrick Cemetery opened in 1832.  When George O’Dwyer authored Irish Catholic Genesis of Lowell in the 1920s, he included a list of St Augustine internments.  Where he got the list from is uncertain and needs to be researched further.
Most of the stones that are left standing are of marble and slate.  Needless to say the marbles are in deteriorating position.  Time, pollution, and acid rain have done their job.  Some of the iconography is just amazing.  For example we saw a beautiful crucifixion scene done in slate, not seen in other cemeteries.  There was also a slate with an hour glass, symbolic of time fleeing.  This is often seen in Yankee graveyards, but not common with Catholic symbolism.  After spending a good amount of time, we only located 2 names from the Lowell list.  One was especially interesting to Walter who is doing an in-depth study of Fr. McDermott’s family, whose roots are in Boston.


REMINDER- Sunday, March 4, St Patrick Church, 10 am- Mass with readings in Irish and music accompaniment by Aine Minogue, world renown harpist.  Join us after Mass as we parade to City hall to raise the flag and remember those who came before us.  An Irish breakfast is served in the church hall after the parade.  Bring your family.  Bring your friends.  Share your pride.
Posted by LowellIrish at Tuesday, February 28, 2012