Francis Xavier in the Acre 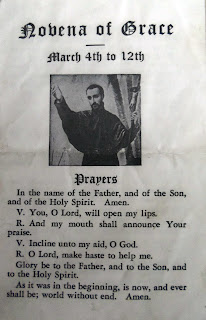 For generations in the Acre, one of the signs of the approaching spring was the Annual Novena of Grace.   The tradition went back generations  to the 1890s when the Xaverian Brothers opened the school for boys.  The Sisters of Notre Dame taught only girls, leaving the boys to attend the public schools.  Long story short the Brothers were brought to Lowell to teach the boys.  The Congregation was named after St, Francis Xavier, a 16th century missionary to India.  In memory of the zeal with which Francis Xavier preached, a novena (9 days of prayer) was held annually from March 4 to 12.


St. Patrick’s used this as a Parish mission.  A Xaverian preacher would hold services in the morning for the school children and again in the evening for adults.  It began with a hymn that began “O Father St Francis, we kneel at thy feet….”  This was followed by a series of prayers, and then the preaching began.  From what I remember, the priest often had an Irish accent and often talked about vocations.  Of course I was 6 and had little idea of what was going on.  Since the novena occurred so close to March 17th every year, in my naiveté I confused St Francis with St Patrick and wondered why the giant statue of St Francis wasn’t wearing green.   We’d even have to attend church on Saturday to make sure we got all 9 days in.  Heaven forbid if one day of the novena was skipped.   All kinds of natural calamities might follow.   Following the preaching there were intercessions and the novena prayer.  In the prayer booklet we were given, there was place where the congregation would silently state their intentions.  Each day I would pray for something important to me like ice cream, a puppy, or more plastic army men.  I’d run home and look under my bed, only to be disappointed.  (I still have my novena prayer booklet.  I stole it.  That’s how archivists begin.  We steal things with the justification of saving it for the future.  Even at the tender age of 6, I had visions of starting a collection.)


The most striking part I have of the novena experience was the closing day.  The priest would lift up a reliquary holding a piece of bone from the Saint.  The tradition is that the faithful kiss the relic as a sign of respect as it is presented to them.  Being a first grader, I had no idea of any of this.  Each of us was assigned to an 8th grader to sit with, like a big buddy.  I just went along with whatever was going on.  I followed my mentor to the communion rail and knelt down like everyone else did.  I saw the priest go from person to person, saw them lean over towards the relic, and then the priest moved on.  The priest put the relic in front of my face.  I did what I thought everyone else was doing.  I leaned forward and sniffed the relic.  I looked up.  The priest had an odd look on his face. He presented the relic again; I leaned forward and sniffed as loud as I kid.  The priest and the 8th grader looked at me and  shook their heads, and then the priest moved on.  It wouldn’t be until years later that I learned the appropriate procedure when I was confronted with a relic of St. Theresa.  But that’s another story.
COMING EVENTS:
- Tuesday, March 13, Lowell National Park Visitor Cntr, 7 pm- Digging Up Lowell’s Irish Past- Find out about the most recent finds in Lowell’s Irish past and most recent archaeological dig.
- Saturday, March 17, Lowell National Park Visitor Cntr, 10 am- Walking Tour of the Acre- Take a walk through the Acre neighborhood and tour St Patrick Church.
- Saturday, March 24, Mass Memories Road Show, Tsongas Industrial History Cntr,- Check this out!!!  What a great event.  Let your story be heard. Hope to see you there.  http://www.uml.edu/tsongas/anniversary/

Posted by LowellIrish at Wednesday, March 07, 2012