In my cellar I have boxes and folders of materials dealing with the Acre’s Irish past.  Some I’ve gathered on my own research.  Others have been handed down by those who share my vocation.  And then there’s the GOK pile.  (GOK means God Only Knows.)  Either I have to take a sabbatical or wait until retirement to sort all this “stuff” out.  Ask me where something is and given enough time I can locate it for you.  There is one piece that is special.  Where it comes from I have no idea, but it’s one that with which I have a personal connection.  It’s an old article from the Lowell Sun, 1958.  It was written by John F. Kenney.
Sports fans may remember Mr Kenney’s name from the Golden Gloves days.  He was born in 1905.  Throughout his life he referred to himself as a “Son of the Acre.”  He was proud to say he attended St. Patrick Church and St Patrick School.  He was a walking library of Lowell’s Irish past and often wrote columns for the Lowell Sun around St Patrick’s Day.  His columns are little vignettes of life in the Acre.   The names and places he mentioned have all but faded into the past.  But the spirit of the man lives on.  In one column he wrote of a slight despair of how the Saint’s day was being celebrated and asked if somehow the sense of a true celebration could be renewed.  That was over 50 years ago!  I wonder what Mr. Kenney would say of us today?  Though ill for many years, he continued his work at the Sun and actually wrote his last St Patrick’s Day column just days before his death at the age of 55 in 1960.  As he wished, he was buried in St Patrick Cemetery with all those Irish who came before him.
I have held onto that yellowed Lowell Sun article from 1958 for maybe 40 years.  I’ve read it so many times I have sections memorized.  So I want to say thank you, Mr. Kenney.  Your words have lasted these many years and perhaps will inspire others today.  Suaimhneas síoraí dá anam. May he rest in peace. 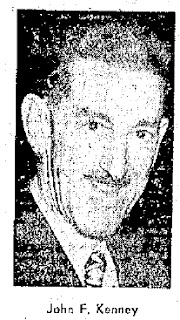 
Today, in year 1960, the gay-hearted folk of Irish stock assemble again in the manner of their tradition and nature to celebrate the Feast of St. Patrick as their patron saint. They'll join in song, and ask you to join them—and with wetting the shamrock, and feasting, and dancing and all, they'll be merry indeed 'til the crow of the cock in the mornin'.


Yet, the celebration today is but "a reasonable facsimile" of the mardi gras atmosphere that once upon a time gripped Lowell. The newer generations cannot conceive of the excitement in the streets a half-century ago—the "St. Patrick's Day Parades" with up to 15,000 marchers accompanied by as many as 16 kilted and military bands; when the boys of several Catholic parishes marched in cadet uniforms. And the horse-drawn floats! They depicted scenes ranging from the lightning struck on the Rock of Tara by the rod of St. Patrick, to the oration of Daniel O'Connell as he offered his life for Ireland's Freedom before the beruffled and wigged Parliament.


Times have a way of changing, however, and it was Marcus Aurelius—no Irishman —who maintained that "all change is inevitably for the best." There are those who would have my head, I suppose, for saying as much, so I hasten to point out that it would not mean at all that the proud Irish spirit has been diluted. The sons of Erin's sons continue to love the mother country with its tradition of hard toil with integrity, and above all the Faith which is their heritage.


The Irish are a people who loved the contest—and a race which loves to compete, must of necessity be a race to love a challenge. The ancestors of Lowell Irish-Americans therefore left monuments to this capacity of theirs to meet ‘the tests of positive action, and these are clearly visible in the structures of the city itself in which these descendants are now prospering.


The grandsires of today's generation, who never made more than $10 or $12 for a six-day workweek in mills and machine shops, built cathedral-like churches of granite; they erected multifloored schools of brick, libraries and public buildings that would be regarded as extravagances were they undertaken now. These pioneers and immigrants, mind you—and there were many minorities other than Irish, of course—built them to "last forever."


Time has brought changes in life, and the living of it, to be sure. But always there will be the challenge to improve on the old order. The "O's" and the "Mc's" are still on occasion, prodded by the proud old men who "came over", with that biting and provocative charge,  "You'll never be the man your father was!" That salient "message" of reminder is familiar to every boy born in an Irish home. It is never spoken without point; it is uttered by one of the father's clan . . . his father's friend who knew his father as a man to stand up to a task; a man for a man's challenge.


This is the time.


Sixty years of this century have passed with a history already rich in content of blood, daring, courage and resolute growth by the people who celebrate St. Patrick's Day today.


Today's Irish-Americans can and will be the men their fathers were.


It's Greater-Lowell now, and it's growing greater still, by that old-fashioned way the old-timers had in resolutely coming to grips with challenges- and making them into changes.
Posted by LowellIrish at Saturday, March 10, 2012