The Bells of St. Patrick's 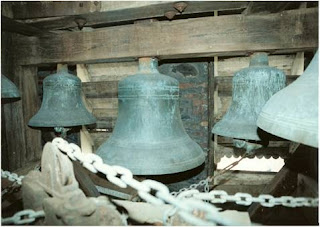 It had been two year but many in the crowd recalled the fire of 1904.  That night crowds stood there and watched as the fire consumed the steeple.  As the wood and slate burned away only the metal bars that held up the tower kept it upright.  Soon the tower began to lean.  The cross that surmounted the steeple began to topple.  All stepped back as the bells glowed red with the heat and fell to their descent.  Some in the crowd claimed they could hear the last of their peels as the hot metal toppled to the ground.  And yet, just two years later in January of 1906 the new chimes of St Patrick Parish were to be dedicated.
Months prior to the dedication service of January, 1906 Father William O’Brien, pastor of St Patrick’s, Mr. M J Johnson, church organist, and Mr. William Goodwin, a well know chimes expert (and father of the late John Goodwin) traveled to Troy, New York to the Meneely Bell Company to commission a new set of chimes.  They made repeated visits during the casting and were present at the final tuning of the bells.  Mr. Kehn of the Meneely Company guaranteed that they would be among the finest set of chimes in the country.  The previous set of bells were 17 in number, and to be honest, were difficult to play, and, as listeners noted, the quality of tone just was not there.
The 11 bells were delivered and set in carriages ready to be installed in the tower.  The formal dedication was to be on Sunday, January 21, 1906.  Each bell was inscribed with the name of a saint; Patrick, Immaculate Conception, Michael, Sacred Heart, Mary, Joseph, Anne, Bridget, Peter, Lawrence and Francis.  The combined weight was over 30,000 pounds.  Patrick, the bell with the deepest tone, weighs 3600 pounds.

Fr. Walsh was the curate on the day of the dedication; he shared with the congregation how he was an altar boy at the dedication of the bells in 1854.  On this day the bell Patrick was located within the sanctuary surrounded by greenery and candles awaiting its baptism.  A brief history of the church was cast onto the bell commemorating the date of the church fire and rebuilding.  The remainder of the bells were arranged in the front yard of the church so that passersby could inspect them.  According to ancient rites, the bell would be sprinkled with water and given a Christian name since it would sing out to God.  The ceremony began with Solemn Vespers.  The De Profundis was sung asking God’s mercy upon the crowd and then the christening began.  The sermon was preached by Fr. Dorgan of the Immaculate Church.  He spoke of how the bells of St Patrick’s once rang in times of danger in the times of hatred by the Know Nothings in the 1850s.  Now they ring out as the church triumphant.
Note: The original bell that hung in the 1831 church was located a few years ago.  When the church was dismantled in the 1850s, it was moved to the firehouse on Mammoth Road.  From there it remained on private property where it is today.  The present set of 11 bells is played by a system of straps and chains that pull clippers to strike the bells.  A winding staircase with 53 stairs rises to where a wooden stand is displayed where the bells are struck.
Posted by LowellIrish at Thursday, March 21, 2013