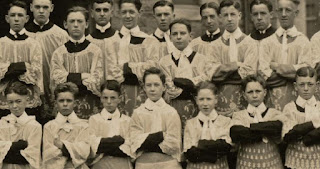 The day before George Russell took this photo in June of 1922, the sanctuary choir was part of the annual show put on by the Saint Patrick’s Boy School.  This was the 40th year that the boys sponsored a variety show to benefit the work of the Xaverian Brothers.  Benefits of the show went to supplement the “meager salaries” that the Brothers earned from their “mission.”  The RKO Keith Theater on Bridge Street was filled beyond capacity.  Tickets had been sold out days ahead of the show.  The beginning of the show had the boys of each grade marching and performing intricate military drills to the thrill of the crowd.  The 100 member strong Sanctuary Choir took the stage with a series of hymns and chants.  The choir was made up of boys and alumni from the school, all under the direction of Brother Nilus.

The definition of Parish has evolved over the decades.  Being part of the Sanctuary Choir was almost an assumption.  If choir wasn’t your choice there were a myriad of other choices.  There was the Matthew Temperance Society (senior and junior divisions), a debating team, and a literary society.  The Cadet band was considered one of the finest in the city.  The Holy Name Society also had a senior and junior division.  The feeding of the poor was the work of the St. Vincent de Paul Society.  Many boys and young men served the parish by assisting at Mass as altar boys; their numbers rivaled those of the Choir.  At certain feasts, 80 altar boys would process into the church.  One of the most well-known societies of St Patrick Church was the Catholic Young Men’s Lyceum (CYML).  This was the male-only club that was means to draw Catholic youth away from the popular YMCA. 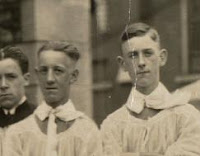 The maintaining of Catholic identity was of major importance.  The rise of parochial schools, athletic, social, and religious clubs and organizations was meant to keep men and youth on the straight and narrow.  These were just the male societies.  Women and girls had many opportunities as well.  They were caught between two worlds.  They were second and third generation Americans in a fast changing America, yet still tied to the beliefs and culture of their ancestors.  The Parish was where the two merged. This week’s blog was inspired by fellow historian and blogger, Eileen Loucraft’s (http://loucraft.blogspot.com/ ) post about the Russell Collection photos at the Center for Lowell History.  You can see the original Sanctuary Choir photo at their site.  (http://library.uml.edu/clh/Russell/In.htm ) The Archives of St. Patrick Parish also has a fine collection of Russell photos.  Details from these photos give us a glimpse into their lives and personalities.  You can see a YouTube video of the photos at http://youtu.be/higq3ASYdhQ .  You can see other videos by clicking the links to the right.
Posted by LowellIrish at Thursday, January 31, 2013