The Neighbors - the Irish on Gorham Street 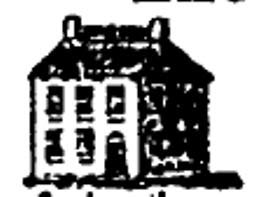 The Acre was not the only place of settlement for Lowell’s Irish in the 1830s.  A growing number of Irish were moving into the area around Gorham Street.  Similarly to their fellow Yankee counterparts in the Acre, the Yankees along Gorham Street were not too welcoming to their new neighbors.  As a matter of fact, the summer of 1832 became quite turbulent in August between the two factions.
It appears that the locals were not happy with the goings on in Gorham Street.  The loud noises and brawls brought out the constables who counted 72 persons living in just one half of a house!  “Their want of cleanliness invites pestilence,” was the quote from the newspaper.  The decision was made that all inhabitants would be removed from the house, but the Irish had a different idea.  They refused to move.
Rumors spread that a number of guns were kept in the house.  On the second night a crowd of about 800 gathered to witness the attempt to evict of the Irish.  Stones were thrown and 2 Irishmen were knocked down. The pleas of the constables were finally heard and the crowd dispersed when they saw there would be no more action that evening.   Five people were arrested.  Bail was set, and the accused were to appear at Court in Concord.  Some put the blame solely on the “Irish population who do not know how to conform to Yankee regulations.”
When September rolled around, the Irish were still in the house.  One of the young residents fell into a sewer and almost drowned.  A terrible “pother” was raised in fear that the little “darlint” may die.  Twenty Irish women gathered and “howled” loudly while the child struggled for his life.  A “stout Paddy” climbed down and dragged the child out by the heels lessening the probability of the “number of tenants in the house being lessened by one.”
Posted by LowellIrish at Thursday, January 17, 2013

Email ThisBlogThis!Share to TwitterShare to FacebookShare to Pinterest
Labels: Gorham Street, The 1800's, The 1800s