Who is this man, and what is he doing??? 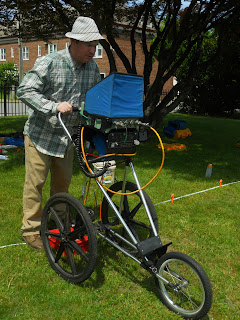 This is Dan Lynch from UMass Amherst.  He showed up with his two trusty volunteers to do some archaeological work in preparation for this summer's upcoming dig.  The tool he's using is a GRP (Ground Penetrating Radar).  The team spent hours laying out grid lines.  (Now I know why I never became an archaeologist.  They have the patience of Job.)  Then Dan walked the entire front yard of the church, inch by inch, every single step, for hours and hours.  Get me drift?  What does it do?  Well, Dan takes the info recorded by the computer and the red box that is being dragged, and when he downloads the data he gets a good idea if and what might be under the ground.  Isn't technology amazing?  (But tedious)  We got there at 9:30 and I left at 5:40 and Dan and Julie were still hard at work.  The data will answer some questions like what is under there, and where should the dig continue.  As soon as I hear from Dan, I'll let you know what the news is.

Things are really moving pretty fast in our work of deepening the story of Lowell's Irish.  One of our readers, Eileen, has an interest in veteran records at St P Cemet..  We hope to reconstruct a d-base of Civil War and WWI burials.  Especially as this is the anniversary of the CW, we thought it appropriate.  From there our favorite historian, Walter, recalled seeing a list that would prove interesting.  Because of Walt's memory we are reconstructing a d-base of Irish CW vet burials at St P Cemet!  What a great way to honor those men.  It's a massive job, but one that is worthy.

On a final note I just learned of the passing of one of Lowell's best researchers of Irish history, Kay Curran.  I've known Kay since I was a kid, and she always had a tidbit of info she'd share.  We walked cemeteries, traveled to Archdiocesan Archives, and teased each other with who had the best new fact.  She loved being Irish, the Acre, and St. Pat's.  Requiescat in pace.
Posted by LowellIrish at Saturday, June 04, 2011