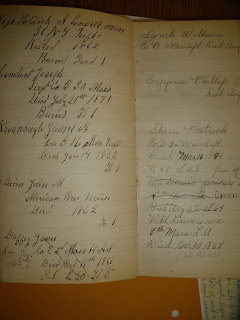 I mentioned a recent find Walter made identifying hundreds of Civil War graves at St Pat's Cemet..  He took photos of each page, one by one.  Walt, Eileen, and myself have transcribed the entire list of 650 names (over 1 weekend).  When you get history fanatics going, they just can't stop.  One would think that would be enough, but no.  Now we want to know more about these vets.  The plan is to identify their resting places (maybe using GPS).  Done?  No way!  Along with that, we'd like to get a little bio about each vet by checking City Directories and obits.  The final product will be a real tribute to those who might have been forgotten over the decades.

A goal would be to place a flag at each site for next Memorial Day.  With that many graves it will take a team of volunteers.  (Hint, hint)  I saw that some groups in other cemeteries have actually placed grave markers (from the Vets Admin).  There is some cost involved as far as placing the stone, though the stone is free.  But that will take paperwork and time filling out all those forms  (Hint, hint)

Just quickly looking over the spreadsheet of the names, breathes life into some of the names.  You won't believe how many immigrated to America and joined the ranks.  The young men in their teens who died, and even some in their 40s.  Why?  Why did these "new" people pick up weapons and go to war?  On the day the 16th Mass left Lowell, they attended Mass at St. Pat's.  At the elevation of the host, the officers lifted their swords in salute.  Some came home and resumed their lives, a few deserted in the face of battle, and some came home and were laid to rest.  Lest we forget.

Hey folks, we've had 1500 readers.  Don't be afraid to share your thoughts.  I'll tell you, it's a good feeling knowing you're helping to preserve the deeds of those who came before us.  Join in!
Posted by LowellIrish at Friday, June 10, 2011