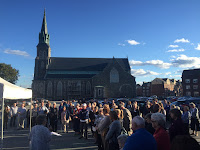 When I was a kid attending school at St. Pat’s, each March we’d learn Irish songs we’d sing at the annual reunion show.  One was Oh the Days of the Kerry Dancing.  Part of the lyrics goes like this:
Oh, the days of the Kerry dancing
Oh, the ring of the piper's tune
Oh, for one of those hours of gladness
Gone, alas, like our youth, too soon!
When the boys began to gather
In the glen of a summer's night
And the Kerry piper's tuning
Made us long with wild delight!
Oh, to think of it
Oh, to dream of it
Fills my heart with tears!

As alumni left Mass concelebrated by Fr. Frank Silva (alum) and Fr. Charles McGrail (former church choir director) they were greeted outside the school by step dancers.  Later the young girls were joined by some slightly older dancers from the 1960s reliving their Kerry dancing days.  As I looked on the crowd of over 150 alumni and friends, the words of the song hit home.  Here we were, some of us decades later, returning to the place we called home for 8 years.  The sun was lowering across the North Common as alumni from the 1940s, 50s, 60s, 70s, 80s, 90, and even the millennials made their way up the front steps of the school.  Just as the song says, for some of us our youth has gone too soon.  I stood there watching as graduates from each decade were called into the school. The most senior of us walked up slowly using the handrail, while the last group, representing the future, walked in taking 2 steps at a time.

There is something unique about St. Patrick’s.  A fact that you may not know, St. Pat’s is one of the oldest continuously operating   parochial schools in the country, starting in 1852.  As Sr. Joanne stated, many colleges and high schools have alumni groups, but not elementary schools.  Then why does St. Pat’s?  I’m not sure, but I have a thought.  As each group entered the school I thought of the paper chains we made when we were kids.  We’d cut paper and glue them together making these long continuous lines.  Seeing those in their eighties, sixties, forties, and twenties all mingling and sharing stories united us into a special union, that long line into the past.

When I attended St. Pat’s, tuition was $1 a week.  That was a lot for many families in the Acre.  Many of us lived in the housing or tenements along Broadway.  Even then the Acre had a reputation, but maybe that is where we found our strength.  The Sisters and lay faculty who taught us held us to a high standard and wouldn’t accept anything less. Maybe that’s why so many who were there last night can today count themselves among Lowell’s politicians, lawyers, government service workers, caregivers, educators, financial officers, skilled professionals, and on and on.  (On a side note, I did notice a very high number of teachers in the group.  Coincidence?  And a high number of police and correction personnel.  Another coincidence?)  Folks who had not seen each other since graduation day greeted each other as if time had not passed.

That link, that chain, had not broken.  Our time at St. Pat’s was built upon what the previous generation had left us.  A major reason for the school being  there today is because of the chain built by the Sisters of Notre Dame de Namur and those alumni and friends who give of themselves today.  The chain continues.

One of the lines in Kerry Dancing talks about the tears of recalling days gone by.  More than once that evening I saw women and men wiping their eyes as they saw their old friends, either in person or old black and white photos.

A last thought.  As I was helping to set up a few hours before the start, a young man, maybe 20 wearing a white t-shirt and arms covered in tats came to the door.  I told him we weren’t open yet.  He simply said, please.  About 15 minutes later I encountered him again as he was leaving the building.  I asked how his visit went.  He was wiping tears from his eyes.  His said, memories.  I asked, Good ones?  He replied, All good, all good.  I’ll be back someday.  Who said, You can’t go home again.

Posted by LowellIrish at Sunday, September 25, 2016