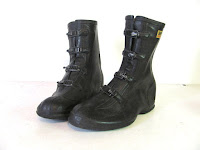 Whether you believe in global warming or not you have to agree that winter is just not what it used to be.   We lived over a mile away from St Patrick School and no matter the temperature we would be bundled under several layers and sent out to make the trek down Broadway and through the North Common to get to school by 8:15, and then make our way home again later in the day.

There were no Thinsulate gloves or North Face parkas.  No, we had good, sturdy, but bulky, coats from Stuart’s or Zayres.  It was always bought two sizes too large so you “could grow into it.”  My hat was one of those ear flap jobs with the strap that went under your chin.  It would leave a red mark around your face for a couple of hours, but kept that hat on in high velocity winds.  Of course there were the leggings which were usually hand-me-down from my cousin Armand.  He was taller and they usually dragged more snow and ice along with them adding to the weight of winter wear.  I had a bad habit of losing gloves.  It was not uncommon for me to have one glove and one mitten.  I was forced to wear whatever was left over.  One time I had to go to school wearing my sister’s red mittens with pretty, little snowflakes on them since I lost every pair of gloves I owned.  To round off the ensemble were the black boots with clips.  How I hated those monstrosities!  Your shoe always got stuck in the boot, and I could never get the hang of those dang clips.  When Spring arrived you might be given the opportunity to change the black devil boots in for a pair of “rubbers.”  What might get a chuckle out of kids today was an everyday word for us.  How times change.  If you weighed yourself before and after donning all the extra goods there was probably a 25 pound difference.  I can recall with sheer terror the Sister standing over me with a look between anger and pity as I writhed on the floor trying to get the leggings, boots, or oversized jacket off.

Walking home from school after a snowstorm was tantamount to making your way through a Marine Corps obstacle course.  First were the snow piles.  Few people shoveled the sidewalks and the plows would make mammoth piles on corners.  Most people would walk around them, but not us.  We’d scale each peak as skillfully as Edmund Hillary climbed Everest.  The next task was to dodge the slush puddles as the cars went by, otherwise you got a mouthful of melted snow mixed in with whatever made up those black chunks that the day before was pure snow.  If you survived that, there was the constant danger of being impaled by the giant icicles that hung from the tenement roofs you passed by.  Every now and then you’d see some come crashing down and smashing to the ground.  My mother would always warn us to look up to see if any icicles might be falling.  She swore she had a cousin who had an icicle go right through him like a wooden stake through a vampire.  Of course if we were looking up we might get hit by a car, but that was all part of survival of the fittest.

But winter also had its many joys; sledding down the big hill by State Teacher’s College, or waiting for Bachelder Street to be closed by the city and start sledding at Wilder to see if you can make it all the way to Walker.  We’d build snow forts and stay in them all day. (Today the safety police would tell us we were in danger.)  We’d eat snow right off the ground.  We all knew about the yellow snow.  Better yet we’d break an icicle of a fence and suck on that.

By the time I’d get home my boots would have to be emptied of snow.  My glasses would steam up from being outside.  My Mom would put all my wet clothes near the stove to dry off.  If we were lucky she’d make cocoa, real cocoa with milk and Hershey’s, not out of some packet.  They’d be chicken soup or better yet tomato soup and grilled cheese.  At night I’d lay in bed and look at the ice forming on the window (no central heating in a tenement) and listen to the plows scraping the cobblestones out on Walker Street resting up for the next day’s adventure to begin again.
Posted by LowellIrish at Friday, February 12, 2016

Email ThisBlogThis!Share to TwitterShare to FacebookShare to Pinterest
Labels: Acre