A Life in 3 Boxes

The amount of research that has been accomplished by Dr. Donnelly and his team and the work of Dr. Mitchell, along with many local historians concerning the role of the early Irish has made an indelible mark on the story of Lowell’s Irish.  Yet, we all refer to one particular source, the sort of Genesis of all studies, The Irish Catholic Genesis of Lowell written by George Francis O’Dwyer and published in 1920.  Yet, his own story is one worth telling as well.


I visited the Boston College Library many years ago to view the O’Dwyer collection which consists of 3 cardboard boxes.  I think I was one of the few to open them since his death in 1942.   There was no rhyme or reason to its contents though the Burns Library is a Mecca for researchers in Irish Studies and its meticulous collections.  The condition of those boxes sadly resembled the author’s life.  Walt and I returned to BC this week to see the collection with a different eye than what I sought almost a decade ago.
The staff had everything prepared as they wheeled out the same 3 boxes, this time placed in some semblance of order.  The first box is a file box with maybe a thousand handwritten index cards.  After spending hours with those cards, and seeing the pencil markings on each one, you sense the passion and drive of the man.   Those who share the need to know more can easily empathize with him.  His modus operandi was to go through every newspaper and city document he had available to him.  Each time he met an Irish name he would jot it down on a little 3x5 card.  He recorded births, deaths, marriages, and real estate transactions.  Of course he did his work at the turn of the 20th century, and now at the 21st century much of the work he did over years, and as he states in a letter to a publisher that he has worked night and day for 10 years giving all of his life to this project, can be done with the click of a computer today.  So much of what he did is easily available online now.  There are some sources he did use that we no longer have available to us.  People.  It’s obvious that he brought his little notebooks with him and sat down with the children and the grandchildren of those early Irish and listened to their tales of days gone by in the Acre.  Some of the stories do not mix with known facts, but that is part of assessing oral histories.  He spoke with Sarah Smith who was baptized in the original wooden St Patrick’s Church in 1831.  He corresponded with Hugh Cummiskey’s granddaughter, Loyola McCann, teacher at the Elliot School, who recalled her grandfather.  Without these little vignettes into the past the human side of our story may have been lost forever
George O’Dwyer was born in Lowell in 1877 and spent much of his life in the family home on Midland Street in the Highlands.  His father, Jeremiah, emigrated from Ireland, possibly County Limerick  in 1872. His mother’s parents were both immigrants.  The O’Dwyer home must have been filled with storytelling and the recounting of days gone by.  From an early age Irish history and genealogy became an interest to young George.  As a young adult, he addressed the Lowell Irish Society about the early history of Ireland.  They were impressed by his knowledge.  While he did have jobs as a clerk and other positions, his real avocation was in his zeal for Irish and Irish-American history. 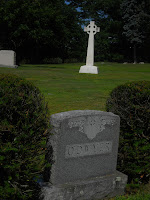 The remaining two boxes at BC tell more of his story.  He begins publishing small tracts on the Irish throughout New England, probably with his own funds.  He writes poetry and one act plays on religious topics and historical events.  He solicits jobs from organizations such as the American Irish Society, who hire him to solicit members throughout New England.  He does not have much success.  Sullivan Brothers prints the piece he has spent much of his life on and has placed all of his financial resources- The Irish Catholic Genesis of Lowell.  Four hundred copies are printed after a number of changes made to the original tract.  Sullivan Bros, sues O’Dwyer for non-payment.  They win and take possession of the remaining books.  This could account why there are so few remaining copies of the original text.  O’Dwyer writes a letter stating his shock at the poor selling of the book, even at the price of $2.
The contents of those boxes are filled with his attempts to find backers for his projects.  He writes that he is totally dependent on the kindness of his sister for a bed and food.  But still he continues writing to newspapers promoting the Irish cause and collecting hundreds and hundreds of slips of paper with names and dates maybe for a future book.   He spends his last 10 years in Boston and his last three months in Long Island Hospital.  He dies in that hospital at the age of 64 in 1942.  The man who literally gave so much of his life to recording the story of the Irish in Lowell and New England has a simple 2 paragraph obituary, never mentioning the legacy he left to us.
Posted by LowellIrish at Sunday, August 25, 2013