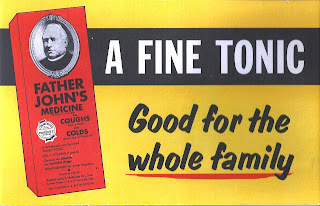 Tradition has it that Father John O'Brien was taken ill in 1855.  He made his way to the pharmacy of Carleton and Hovey on Merrimack Street to get something for relief.  He was given a tonic that was composed of cod liver oil and had a licorice taste.   Unlike many other medicines of its time, the prescription contained no alcohol.  It worked so well for the priest that he began recommending folks to visit the apothecary and ask for "Father John's Medicine" - a legend was born.
Soon the shop was packaging the medicine for sale.  Father John was given a small stipend for using his name and picture. It was agreed that anyone Father John sent to the shop personally would not have to pay for the medicine.  The pastor was always looking after his flock.
Within 50 years the medicine was known far and wide.  Early literature claimed it worked on "consumption, grip, croup, whooping cough, and other diseases of the throat."  Pamphlets given   to customers stated, "All disease is due to a run-down condition of the body, unhealthy tissue, blood poisoned with impurities, and general weakness."  Guarantees were made by the manufacturer of its restorative powers.  The potion was pedaled in numerous countries.  Pharmacies built huge displays in their windows advertising the product.

The factory building, which still stands on Market Street, was a model of production.    Every process from manufacturing, to bottling, to packaging, to advertising was done in that one spot.  Freight cars pulled in back of the building to ship cartons to parts unknown. A second factory was built in Montreal, Canada.
For many years the company was overseen by the Donehue family.   The generosity of the management to its employees was well known, even so far as keeping workers long past the need to, just so an employee could have a job. In the he 1970s the company was sold.  The building was made  into an elderly housing complex, and the product no longer  made its home in Lowell.  This was not the end of the medicine company.
It is still produced today by the Oakhurst Company in New York, and can be found on drugstore shelves in the local area.   The recipe remains the same except for one ingredient the government said must be included.  The brown-orange bottle with the trusting face of Father John O'Brien has been a sign of assurance to people for over 150 years.
Our Parish Archives has a nice collection of Fr. John's items donated by Lucien Villandry when the factory closed.
Posted by LowellIrish at Saturday, October 27, 2012