"In the Name of Saint Bridget" 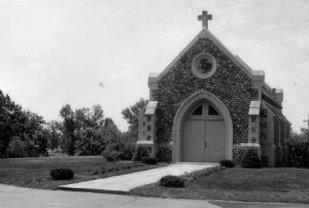 Like his ancestors before him, Msgr. William O’Brien was a man with a vision.  A cousin of St Patrick Parish’s previous pastors, Fathers John, Timothy, and Michael O’Brien, he had big ideas.  A native of Nenah, County Tipperary, Msgr. O’Brien, like his ancestors, made frequent trips home.  On one of these trips, he came back with an idea to build a mortuary chapel in Saint Patrick Cemetery.  Not just any chapel, but the best New England had ever seen.  Again, this was not some ordinary chapel, he designed it himself based on a chapel he saw back home in Tipperary.  Dotting the Irish countryside are dozens of these small stone oratories that were the places of prayer for some of the ancient Celtic saints.  He probably based his designs on examples he saw in his own hometown.
He wanted to incorporate the primitive design of an oratory with all the modern technologies of the 1920s.  A primary concern would be the inclusion of a holding area for coffins that needed storage during the winter months when the frozen ground made internments difficult, if not impossible.  Placing the chapel on the slight rise of earth made it ideal for his next idea.  The coffin would be borne into the chapel, and at the end of the committal prayers an elevator would lower it into the receiving chamber below.  From there, cemetery workers could transport the coffin to the appropriate lot.
The exterior was made of granite with a slate roof.  Large oak doors allowed entrance to the chapel’s interior and could remain open if there was not enough room for priest and mourners inside.  Upon entering, the eye was immediately drawn to the marble altar with a statue of Our Lady of Victory.  The walls too were of white, Carrara marble imported from Italy.  Six stained glass windows, some donated by local undertakers, lined the walls allowing tinted light to dapple the interior.  Msgr. O’Brien saw to it that the Stations of the Cross lined the walls of the interior so the faithful could later visit and pray for the deceased.
The dedication ceremony was set for Memorial Day 1922.  The Cardinal himself, Lowell native William O’Connell and good friend of Msgr. O’Brien, would lead the services.  When the day arrived he visited the grave of his parents and then processed to the chapel.  Thousands attended.  He blessed the chapel and dedicated it to Saint Bridget.  The Cardinal admired the chapel so much he had an almost identical one made for himself and placed in the Chancery grounds.  (The Cardinal’s remains were recently removed with plans for the chapel to be demolished.)
Msgr. O’Brien was sure to include one more detail to his plan.  Unlike his ancestors who all chose to be buried in the front yard of St Patrick’s church, William O’Brien chose to be interred in the chapel which he built.  Little do today’s mourners know that when they enter the chapel, William O’Brien’s remains are located just under the doorway in a niche in the foundation.  Interestingly, O’Brien dies just a year after the completion of the chapel.
Posted by LowellIrish at Friday, September 28, 2012