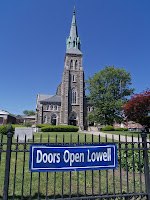 Today was Doors Open Lowell, and it couldn't have been a better day, on a whole lot of levels.  If you haven't been to St. Pat's in awhile you have not seen the giant scaffolding along the Resurrection transept window.  When my helper, daughter Donagh, and I arrived the workmen from Martino Stained Glass Studio in Framingham were setting up for the day.  I don't like heights, but how could I not resist asking if I could climb up.  A little part of me hoped they'd say no.  Hey, do you know how high up it is?  Anyway up I climbed.  The workmen told me how they had to take the entire window out, literally hundreds of pieces.  Each pane had to be cleaned, repaired where needed, re-leaded, and then reinstalled into the frame.  Since I was a kid I'd stare up at that window never imagining I'd be eye to eye with the centurions witnessing the Resurrection of Christ.  The detail is phenomenal.  The shades within each piece are a spectrum of color.  I took dozens of pictures, but my hands were shaking so badly not all came out as I hoped.  The view of the sanctuary from that high up allows for a very different perspective.

The windows were installed in 1906 following the 1904 fire.  The 15 windows tell the story of the Mysteries of the Rosary (Glorious, Joyful, and Sorrowful)  The window at the entrance of the church is St. Patrick Teaching the Chieftains at Tara.  The theme of the mysteries was very popular at the turn of the century.  Each window is hand-painted and leaded.  The design comes from a studio in Belgium (a second entry says the glass was shipped from Munich, Germany). 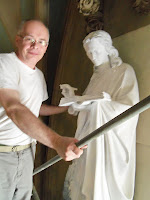 A second crasftsman on the scaffolding was sanding one of the statues on either side of the window.  In 1906 the Joseph Sibbel Studio, who worked with architect, Patrick Keely, designed the 6 statutes that flank the 3 transept windows.  They represent the 4 evangelists, along with Saints Peter and Paul.  The one statue currently being worked on is being sanded, then repainted in the original colors.  The entire cost for this project came from grants from the DeMoulas Foundation and the Archdiocese.  There are 5 more to go if anyone is interested!

The best part of the day was meeting all the folks who came out to tour or take in a little peace and tranquility that this house of God offers.  Some strolled through the aisles admiring the art.  Some stopped to discuss the architecture and watch the PowerPoint.  A few lit candles.  So many admitted being from Lowell and never had stepped in before.  I love sharing our story with them, and hearing theirs.  Yes, it was a good day.
Posted by LowellIrish at Saturday, May 19, 2012