The Road to Emmitsburg 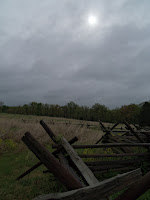 The road to Emmitsburg is the iconic pastoral scene.  The road begins at Gettysburg center and continues into Maryland.  The white painted fences separate the wheat fields, orchards and farmlands that make up the panorama before you.  The low hills that rise and fall paint a scene straight out of an artist’s sketchbook.  The white framed farmhouses with their bright red barns stand as reminders to the area’s agrarian past.  This is also the road where much of the fighting and dying occurred on three days of July, 1863.  It was the job of the 16th Mass Infantry to defend the Emmetsburg Road.


James and Jane Roche and their 6 children probably left Ireland about the time of the famine and found employment and housing in Lowell.  When their son, David, was old enough he got a job as an operative in the mills.  The family lived on Suffolk Street and seems probable that their life resembled that of the many thousands of other Irish living in the Acre.  When the call came up for volunteers after the Riots in Baltimore, David Roche, like many Irish, signed up, and was given the commission of Lieutenant.  Before the 16th Mass left Lowell, they attended Mass at St Patrick’s Church and marched to the trains that would carry them to war.


The 16th Mass had a full record of encounters in the early years of the war.  As 1863 dawned, now Cpt. David Roche, was given a furlough and traveled to Lowell to marry his sweetheart, Margaret Harrington, before returning to the war.  The 16th had just finished the battle at Chancellorsville when they were ordered to Gettysburg.  By day 2 of the battle it was apparent Lee was going to try to take the road.   It is said that the artillery the two forces engaged could be heard all the way to Washington.  It wouldn’t be until 8 days later that Roche’s family would be notified that their son was shot in the head during the fighting.  Cpt. Matthew Donovan, anther Lowell Irish who enlisted into the 16th, made sure that his comrade’s body was quickly buried under a tree and a marker placed for future identification.  Back in Lowell, James Roche, David’s father, hired Alonzo Quimby, a local painter, to retrieve his son’s body.  Bringing the wounded and dead back to their homes became a new business as was advertised in many newspapers.  Ads also began appearing in the Lowell Courier for women’s black woolen shawls.  The ads noted how the capes were in great demand and supplies were being replenished as quickly as possible.  The young widow may have taken advantage of the sale.
Mr. Quimby’s mission was successfully accomplished, and a full military funeral was carried out at St Patrick’s Church.  “The services were very appropriate and interesting.”  The procession was lengthy with several military companies represented as well as City officials.  It would be remiss not to state that the Courier was filled with such sad stories on a daily basis recounting the deeds “of the brave soldiers who sleep their last sleep.”  Such accounts went on for the entirety of the war.


Standing by the monument, taking a photo for this entry, I noted a small grove of trees and wondered if this was where Cpt. Roche was hastily interred.  The only sound that could be heard was the wind through the tall grasses.  The tranquility of the Emmitsburg’s Road today masks the horrors of 150 years ago.
Posted by LowellIrish at Saturday, April 28, 2012