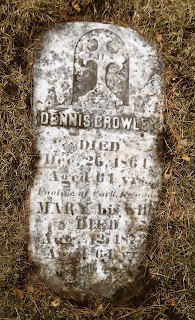 The trip between the towns of Lowell and Boston was a long one, about 45 miles.  Driving it along mostly unpaved roads that were dusty in the summer, muddy in the spring and fall, and frozen in the winter, made the journey arduous no matter what season you were called on.  And if he was carrying a double or triple load, well that just made Denis Crowley’s day.  Sure there were some places where the road was paved and even cobble stoned, but that was the exception. Work was work; it paid the rent. Besides he was performing one of the corporal works of mercy.  Surely the good Lord would look kindly on him when it was his time to meet his maker.  You see it was Denis Crowley’s calling to bring Lowell’s Irish Catholic departed to the consecrated, burial ground of St Augustine’s Cemetery in South Boston.  Sometimes he would have to continue on and drive his wagon up the hills of Charlestown all the way up to Bunker Hill Cemetery where Irish Catholics were just given permission to bury their dead by Boston’s city fathers who had denied burials to Catholics.
Born around 1800 in Cork, Denis left the home of his parents David and Joanna Crowley to travel  to America about 1820.  This makes him one of the earliest pioneers to come to Lowell.  It was in Lowell where he met and fell in love with Mary Connolly, another Irish immigrant.  They filed their intent to marry in Lowell in October of 1827.  The ceremony may have been performed on one of Father Mahoney’s trips to the Paddy Camps in the town of Lowell, since it would be another decade almost until a permanent church would be built.  Mahoney tried to visit once a month to say Mass, baptize babies, marry couples, or pray for their dead.  The good Father would then get back on his horse to continue to the next mission.  At this point the Diocese of Boston covered Massachusetts, New Hampshire, and Maine, along with the Indian settlements in the far north.  All of this territory was ministered by a handful of priests.  If the ceremony wasn’t performed in Lowell, then Denis and Mary may have made a trip into Boston to be married at Holy Cross.
But Lowell remained his home throughout his life, specifically the Acre, to be more exact in all the records that remain, Denis never moves more than a block away from St Patrick Church.  It may have been on one of these long trips into Boston that he decided to raise his status in the Paddy Camps by white washing his house.  This action made such an impression on the Yankees of the town that it was recorded as a practice other “Kelts” might follow, which they did.  He listed his occupation as a laborer and later ended up working at different corporations and then the Lowell Machine Shop.
The Crowley home must have been hive of activity, not only with the eleven kids Denis and Mary had, but with all the Crowley relatives that would spend time with them.  Census records show a number of possible Crowley relatives that remain close neighbors throughout his life.  One of Denis’ children becomes the Hon. Jeremiah Crowley Esq., who has his own special role in Lowell history.
Just after Christmas in 1864 Denis’ heart failed on him.  The doctor listed his cause of death as dropsy, congestive heart failure.  The man who brought so many of Lowell ‘s early Irish to their final resting place in Charlestown and South Boston was brought to Yard One in St. Patrick Cemetery  along with the other Irish pioneers who were laid to rest.  A small marble stone was erected.  Mary would remain another eleven years in the family home on Broadway Street before joining her husband of almost forty years.
Posted by LowellIrish at Friday, January 20, 2012