In the last 2 years more research has been done regarding Lowell's Irish pioneers than in the past 2 decades.  I'm honored to be playing a small part in it, but I'm just the guy who collects all the stories and data the real historians are gathering.  Needless to say my laptop's desktop is covered with files.  There are dozens of dozens of them.  I need a better filing system. 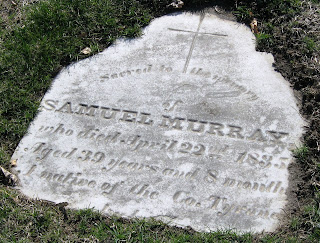 Over the last months, we've found out much about the life of Hugh Cummiskey, his family, Father McDermott, and other prominent names.  We sometimes forget how tough life was back then.  The name of Hugh has come down through the generations as Lowell's premier Irishman, but certainly he was not alone.  A friend of Hugh was Samuel Murray.  Murray was 7 years younger then Hugh.  There was a strong bond between the two.  Maybe the strongest link was they were both Tyrone men, but it is assumed Hugh brought over many workers from his home County.  One story back in Ireland was that anyone wishing to come to America would go to the Cummiskeys in hopes of making a connection across the Atlantic.

The two men were close enough they the went into business together running a West Indies Dry Goods store on Merrimack Street.  It would be compared to a modern variety store today.  He was probably quite successful since he later branched out and opened his own store.  Success meant he now how the ability to ask Margaret Holland to marry him, and in the cold of winter 1833 the two went to Saint Pat's Church and were married.  He takes the step to become a citizen in his new adopted homeland.   Life is good for the newlyweds and Samuel, along with his best friend Hugh Cummiskey, are among the first constables in Lowell.  The two men must have been held in the highest regard by their peers and the Town Fathers.  They would have to patrol the Acre, settle small disputes, and keep the peace.  The reputation of the community was on their shoulders.  Hugh and his protege were on their way up the social and economic ladders.  But the Fates must have their way, and Samuel Murray at the age of 39 dies, leaving his young wife alone and in debt.  His will shows that he owed money to several creditors.  The document gives us a glimpse into the life of an up and coming middle class Irishman in Lowell.  Among his possessions were sheets and pillowcases, candlesticks, 3 tablecloths, 1 cane, 5 vests and 1 great coat, window curtains, and 2 looking glasses (mirrors).  The list goes on, followed by creditors.

His young wife has enough to erect a marble stone (not slate like most others) in the Catholic Burial Ground.  Did his friend, Hugh, grieve?  What happened to Margaret, his wife of just 2 years?  Were there no children to grieve?  One wonders if it would have been Samuel Murray's name in the story of Lowell's Irish community   if he lived.  As research continues we find out more about the lives of those who came before us.  They become more than historical figures.  Once again they have a voice.
Posted by LowellIrish at Friday, November 11, 2011