I met Kim a few months ago at an Open Doors event.  She came bouncing into St. Pat's Church with more energy than anyone should have at that time of the morning.  That's also when I realized what a unique individual she really is.  Kim is the assistant administartor at the Lowell Historic Board and works with Steve Stowell.  We've crossed paths a few times since then, and each time she amazes me with her talents.  Which brings me to this week's topic, the Costello Monument.  Most folks who drive by assume it is a mausoleum, not so.  Saint Patrick's has no mausoleum.  As the predominant landmark of the cemetery you might be interested in more of its background and architecture (Kim's forte).  So I invited Kim to be a guest blogger.  (Any other "volunteers"?)

Along with that, Kim will be conducting a tour of Old English on November 20th at noon.  Our neighbors share a number of great slate stones that are masterpieces of art and date to Lowell's earliest days. 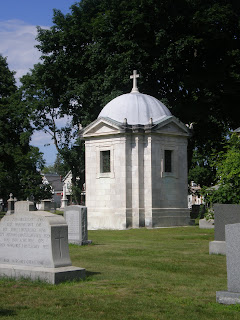 Costello Chapel
St. Patrick’s Cemetery
By: Kim Zunino
One of the most fascinating structures in the St. Patrick’s Cemetery is the Costello Chapel. This chapel was commissioned by prominent businessman Thomas F. Costello around 1905. With a very successful plumbing fixture business in , he had the chapel built for his son, Rev. Fr. George A. Costello, who served as the pastor of St. Bridget’s Roman Catholic Church in until his death in 1915. Thomas Costello passed away in early 1906.
Often mistaken for a mausoleum, the chapel was designed for performing Mass and the only burials are in the Costello family plot in front of the structure.  Designed by the prominent Swiss-American ecclesiastical architect Franz Joseph Untersee, the classically designed chapel was built of stone from the Vermont Marble Company of Proctor, . The structure has bronze entry gates and a painted copper roof. The interior of the chapel has had some conservation issues, as the marble-covered walls have been failing and pieces have been falling onto the altar and floor of the chapel.
What makes this chapel so amazing is that it one of only a handful of Guastavino domes left in . Rafael Guastavino was a successful architect and builder in when he immigrated to in 1881 with his young son, Rafael Jr.  In 1885 Guastavino Sr. patented a type of structural tiling in the called the “Tile Arch System”, in which interlocking terra cotta tiles and layers of Portland cement combined to create self-supporting arches and domes. The Guastavino Fireproof Company was founded in 1889 and was responsible for designing the tile ceilings of many historic landmarks, including the Boston Public Library, two Vanderbilt family estates, and the ceiling of the Registry Hall on . They are also responsible for designing dome at the (1896) in , which was added to the National Register of Historic Places in 2010.

Posted by LowellIrish at Saturday, October 15, 2011