Neither rain, nor sleet, nor..... wait.  That's for mailmen.  But it's similar for those who give tours where the advert says rain or shine.  Actually, the sun was out, and it was a little tepid by the time we finished up.  The LAOH began with their Mercy Drive dedication.  Led by Donna Reidy, 3 stones of Irish immigrants who have been laid to rest without benefit of a marker to remember them, were dedicated.  Seeing the field of tri-colors of previous dedications, gives you a great visual of all the work Donna has done over the years. 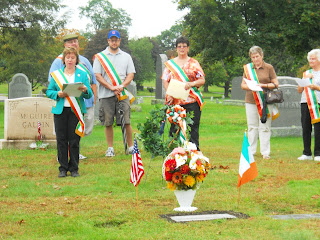 The year 2011 marks the beginning of the sesquicentennial anniversary of the Civil War.  Those who are regular readers know the extensive work that has been done for the past few months gathering the names of Irish Civil War vets interred in St. Pat's.  Eileen, Walter, and myself have been gathering not only burial info, but regimental and family info where applicable.  These were real people with hopes and dreams who experienced the battlefield.  Many of them took America as their new home and picked up arms to show their commitment.  It is only right and just this be done in their name.  The cemetery office was given a copy of the spreadsheet which is 90% complete.  (Hey, it was a bigger job than we could imagine, but we couldn't let it go.)  We hope those who are searching for ancestors will find some benefit from our labors.  Eileen and Walter spoke at several of the CW vets graves.  Next year we will begin dedicating CW stones for those who are missing markers.

﻿﻿
Hugh Cummiskey was 82 years old when he passed away from this his home on Adams Street.  He referred to himself as a "gentleman" in his later years.  Lowell had changed greatly from his arrival in 1822.  By the time many of the Irish had moved out of the Acre for the new neighborhoods of Pawtucketville and the Highlands.  Three daughters had become nuns.  One remained unmarried, and the last had her family.  He lived with his wife Rose.  As old age approached I imagine he would sit in his home staring out the window at the tower of Saint Pat's, his memory drifting back to his home in Crossan.  Walking the tree lined lane to his homestead.  Weeding the garden behind the house.  Looking over the rolling hills and mountains as he brought the cows to the next pasture for feeding.  Colm and I shared this image and thought it appropriate to take a stone from the Cummiskey homestead and place it in Hugh's final resting place.  Walter and I shared the honors of doing so. So Hugh now rests with a little piece of his home.  The circle closes. 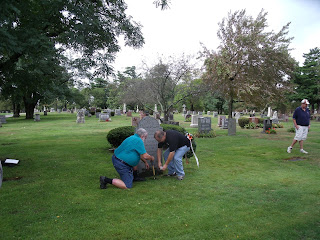 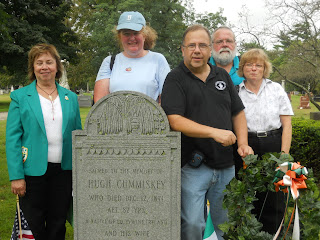 Posted by LowellIrish at Saturday, September 24, 2011