From Bishop Fenwick’s Diary: The Bishop this day performs the ceremony of dedication of the catholic Church in Lowell, under the auspices of St Patrick.  The Very Rev Dr O'Flaherty preaches on the occasion & the Rev Mr Mahoney celebrates Mass.  An immense concourse of people attend of all denominations, as also many Catholics from Boston.  The large open space around the Church is literally covered by those unable to obtain place in the Church.  The Choir is conducted by singers chiefly from Boston who volunteered on the occasion.  In the afternoon the Bishop administers the holy sacrament of Confirmation to thirty nine persons.  The weather is excessively hot.  The Church at Lowell is 70 feet by 40 & is neatly finished in the Gothick style.

July 3rd, 1831.  The dedication of Lowell’s first Catholic church (only the third in all of New England) received but a single sentence in the Lowell Mercury.  More space was given to elections in Kentucky or rowdiness of certain boys in the city.  Other cites’ newspapers gave more space to the event than did the Mercury.

The day was exceptionally warm.  Dr. O'Flaherty who gave the sermon was the preeminent Catholic speaker of his day.  The Catholic Miscellany (the forerunner of The Pilot) stated that the Catholic population was about a thousand people in 1831, and 2 to 3 thousand showed up for the dedication.  The church was likely constructed by the Irish workers who made up the Paddy Camps.  It was made of wood with a stone basement.  The top of the steeple was surmounted by a gold orb and cross.  (The top of the cross is among the prized artifacts in the parish archives.)  Surely the steeple was one of the tallest buildings in the town of Lowell and made a bold statement to the Yankee population.

In the afternoon the bishop confirmed 39 candidates.  It was a busy day for the Bishop with Benediction and Vespers rounding out the day.  The Miscellany concluded by saying, "May Lowell enroll it among the happiest days of her history."

Interestingly, just weeks before the Mercury gave detailed accounts over several days of the troubles in the Acre while the church was being constructed.  In May of 1831, several groups of trouble makers (some say unemployed men, others say out-of-towners) made threats upon the Paddy Camps with threats of burning down the church which was under construction.

Father Mahoney of St Mary’s church in Salem MA had been assigned as the visiting priest prior to the church being built. Poor Mahoney had a wide circuit, probably on horseback, of riding through different towns during the week to celebrate Mass.  Bishop Fenwick made him pastor in Lowell to the disappointment of those in Salem.

When the church was opened in July of 1831 it was already too small for the growing congregation.  People traveled as far as Nashua and Groton to attend Mass.  If Mahoney knew what was in his future he may have told the Bishop no thanks.  Within a short time, trouble within the Irish community brewed to the point of in-fighting between those who came from different counties in Ireland, problems with his new curate, and problems with fundraising for extensions and paying workers.

It’s good for us who claim Irish roots to remember this date and to remember those who went through trials and tribulations so that we can be here today.  For 185 years St. Patrick’s has been a landmark in the Acre continuing the mission of those who started our story.  May they be remembered. 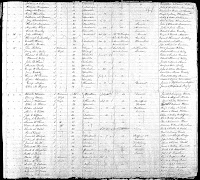 Many people who go to St. Pa't Cemetery are disappointed to find that record keeping doesn't start until 1895.  Sure there are city vital records and other sources that can be checked, but basically looking for early or mid-nineteenth century information on Lowell Irish it's scattered at best.

All the way to 1995 a project began in the cemetery to help close the gap.  A team of volunteers began uncovering dozens and dozens of slate stones that had lain buried for generations.  Those stones are inscribed with the names of the early pioneer Irish who came to Lowell.  They often include dates of birth and death, county of origin, sometimes causes of death and if you're lucky epitaphs left by family members.  From a genealogist point of view, the stones can be a gold mine.

As the project has evolved the stones have been uncovered, data collected, the stones cleaned and photographed.  We've been releasing data as we have recorded it, and I can now say we are done.  The inscription list on our website is the final work done on this project.  We just added dozens of more family names.  There are now almost 1300 names dating from the 1830s-1860s.  If you see that a stones has a photo, I'd be glad to send it to you.  Right now we don't have the storage to put all the jepgs on the site.

To access the information go to LowellIrish.com.  The far right hand tab says more and look under Inscription Yards 1, 2, & 3.  I hope this work benefits researchers now and in the future.
Posted by LowellIrish at Saturday, June 18, 2016 No comments: